A Visit to Downing Street

A couple of hours after a biology exam at school, I found myself stepping out of a black cab onto a clamorous Whitehall. The frustrated beeping of horns was audible in every direction, with traffic coming to a standstill as a Tube strike forced all commuters onto the roads. Between ornate Georgian facades and war memorials, crowds of protesters thronged the pavement outside the black gate to Downing Street. That evening, a confidence vote would be held in Boris Johnson's leadership. Tensions were running high among the protesters, who demanded his resignation, voicing their discontent through their megaphones. After narrowly squeezing between the protesters, and several elated tourists, I was granted entry to the heart of Government.

As someone who is fascinated by and studies politics, there are few words to describe the sight of the building. It was as if my mind had taken a journey through space-time for a few seconds and landed in an odd dream. I gazed with amazement at the meticulous, rather formidable-looking black bricks which enclosed the daily hustle and bustle of the Cabinet and the Civil Service. The sight of the black door - a door which represents countless years of Britain's politics, past and present -  made me question if this was reality. And the media were huddled a few metres away, anxious and desperate to catch a glimpse of any minister or advisor who might be able to comment on that evening's vote. Being on the periphery of Government was overwhelming to say the least.

The door's glossy surface was dappled with lighting from the camera crews, and from an old light in front of the door, supported by an arch. On either side of the door were bunting, in red, white and blue. A lunch in honour of the Platinum Jubilee was being held by the Department for Digital, Culture, Media and Sport (DCMS), to celebrate the work of volunteers and community leaders across the country.

I had been invited for leading the 70 Nestboxes for 70 Years project, which saw 106 garden nestboxes and 20 Swift nestboxes being donated to schools across London. The project's aim was to encourage young people to notice and appreciate nesting birds in their school grounds, introducing them to urban nature in a simple way. It was carried out in celebration of the Queen's 70th year on the throne, which I thought would be a great vehicle to engage more London schools with environmental education. The response was unexpected, with not 70, but 106 schools signing up; this would have not been possible without the support of the Cameron Bespolka Trust, CJ Wildlife and Swift Conservation.

The 107th garden nestbox would be placed in the Downing Street Garden.

The Jubilee lunch had coincided with the visit of Team England and the Commonwealth torch, to celebrate the Birmingham 2022 Commonwealth Games. While queuing to enter the building, I was not greeted by the Prime Minister or any civil servant, but a giant multicoloured cow - Perry, the mascot for the Games. He danced enthusiastically at the sight of my tie, which had a pattern of flying Kingfishers on it. He took a particular liking to it.

Soon after being received by Perry, it was my turn to enter Number 10. With mixed feelings of caution and wonderment, I reached for the intricate door knocker above the golden 'FIRST LORD OF THE TREASURY' postbox. I knocked on the door twice, and the footman answered and welcomed me to 10 Downing Street.

The door opened onto the splendid entrance hall. In front lay a short red carpet, flanked on either side by checkered flooring. There, another staff member informed me that phones were not allowed, so I placed mine in a small wooden cubbyhole by the door. I was led out of the hall through two modest double doors, to the left of which hung an imposing portrait of Sir Robert Walpole, the first Prime Minister of Great Britain. I wonder how many successors he had witnessed enter and exit by the black door over the years.

The next room was a little more spacious, with a fireplace beneath a marble-coloured mantlepiece on the right. I left my coat and bags there, except the one containing the nestbox for the Garden. The next set of double doors led into a hallway, with busts, and lamps which cast small pools of light onto the floor. Yet another member of staff allowed me to proceed up the stairs to the right of the hallway: the famous staircase, which has been replicated in numerous films.

Tall lamps, which resembled miniature streetlights, marked the beginning of each flight of stairs. The bannisters were a radiant gold, but the walls were, frankly, quite an ugly, garish yellow; thankfully, much of it was hidden by portraits of past Prime Ministers. Black and white portraits of every previous Head of Government, from Pitt the Younger to Churchill, from Thatcher to May, lined the walls up until the end of the third flight of stairs.

It was here where I met DCMS civil servants Jake and Lara, with whom I had been corresponding via email over the past two years. We remarked how wonderful it was to finally meet in person, and I handed them the bag which contained the nestbox. It was whisked away by other civil servants into another corner of the Downing Street maze.

From the staircase, the civil servants led me through a series of elaborate dining rooms. Each room was packed. People were huddled around seven to eight tables, each draped in Union flag tablecloths and laden with flags and mugs. Magnificent portraits of historical figures and monarchs hung from the walls: Elizabeth I, William IV, Raleigh, Shakespeare and two of Wellington, to name but a few. The wallpaper was a fiery orange-red. Each room had a subtle glow, provided by small lamps on exquisitely-carved wooden tables. The ceiling was embellished with beautiful chandeliers and touches of gold leaf, a contrast to the peeling paint around the windows looking out onto the Garden.

The Garden appeared rather manicured, with small trimmed hedges and brightly-coloured flowers, interspersed with tables and chairs. Despite the visible lack of areas for wildlife, I did manage to hear the songs of a Robin and a Goldfinch, piercing above both the traffic outside and the excited chatter within the building.

Eventually, Jake and Lara managed to find an empty table, in a smaller room. This room had various modern art pieces, and another marble-coloured mantlepiece on which fragments of moon rock collected during one of the Apollo missions were displayed. I sat down at the table with two other Points of Light. Hassan Al Khawam, a Syrian refugee living in Northern Ireland, helped to set up the charity NI Hyatt. The charity supports refugees in Northern Ireland, especially with improving mental health, promoting integration, and providing representation in community decision-making. Jessie Davies, a campaigner who has used TikTok to raise awareness about her speech impediment, makes short videos on how it affects her in everyday life. Over a short period of time, her account has gained three million followers.

Though the areas on which we campaign are very different, we did find many commonalities on our experiences of campaigning; these included gaining  meeting like-minded people through social media and working with different levels of Government, and the successes and challenges that come with it. We were also given the exciting opportunity to speak to one of DCMS's ministers, Sports Minister Nigel Huddleston, about our various campaigns and how the Government can support them. At this point Perry reappeared, dancing once again at the sight of my tie.

Later in the afternoon, Hassan, Jessie and I chatted over delicious afternoon tea; the scones were outstanding. Afterwards, I had some fabulous conversations with the civil servants on past Prime Ministers, general elections and other aspects of politics, while we walked around each part of the building and examined them in more detail. In a guarded hallway, I had the great honour of briefly meeting Larry the Cat. The portly tabby blocked the hallway, happily licking his paws, stretching and meowing with delight when his collar bell jingled. The security guards either side of him stood motionless like statues, clearly not entertained by the Chief Mouser. Neither was Perry, who had been leaping behind me through every room and hallway.

After three unforgettable hours, it was time to leave the heart of Government. I walked out of the black door and stopped to gaze at the Georgian terraces once more. The media were still waiting outside for a Government response to that evening's vote, now well underway. Back in reality, the sound of frustrated drivers echoed throughout Whitehall once again. Rush hour had arrived, the streets inundated with commuters. Fortunately there was one Chiltern line train leaving from Marylebone and heading in the right direction, to Harrow on the Hill. It was packed to say the least. NOTE: shortly after writing this, I unexpectedly received a photo from Downing Street in the post. It is of the nestbox, which the civil servants have put up in the Garden. I have informed them that it must be well out of reach of Larry's paws. Fingers crossed, the box will have its first residents next year! 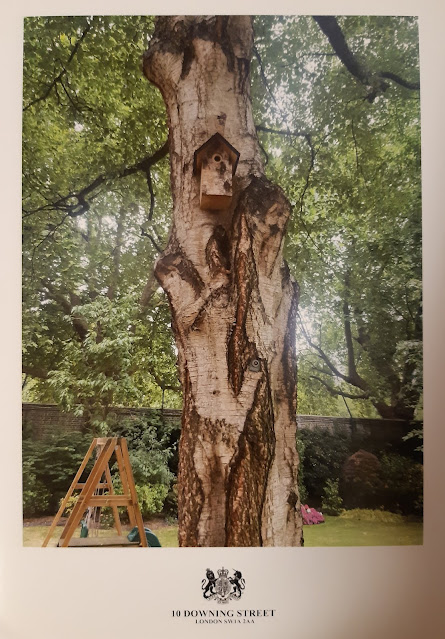 The nestbox in the Garden