18th February 2020
For a number of years, I had an ambitious plan to visit remnants of the Great North Wood, ancient woodland in the London Boroughs of Southwark and Lewisham. Most of the reserves here are volunteer-run, so it can be challenging to visit them all at once (all of them opened on one day two years ago), but I made my first attempt. Arriving at Crofton Park Station in Lewisham, I could immediately sense the vibrance of the borough, and its large community spirit: no wonder it will become the London Borough of Culture next year. Next to the station lies a beautiful little community garden, Crofton Park Railway Garden, which I was to visit later. I walked through the leafy green suburbs of Crofton Park and Brockley, where every front garden was covered in an assortment of weird and wonderful trees, bushes and hedgerows, in front of Victorian houses that stilled retained their beauty. House Sparrows, a bird which has declined so much across the UK, flourished in these habitats, and the quiet streets in themselves seemed to bestow a sense of deep contemplation and calm onto those that walked through them.

At last, I reached my first destination: Brockley & Ladywell Cemetery. Though not a Magnificent Seven Cemetery (I have not visit any of them! They are Brompton, Nunhead, Kensal Green, Tower Hamlets, Abney Park, Highgate and West Norwood), Lewisham Council have designated it as a Site of Importance for Nature Conservation. Cemeteries are surprisingly amazing habitats for wildlife, and this ancient burial ground was no exception: Woodpigeons cooed on the ancient headstones, and Grey Squirrels chewed a nut or two, not bothered by the visitors. Blackcaps sung in the trees above, and snowdrops could be seen around the entire site. 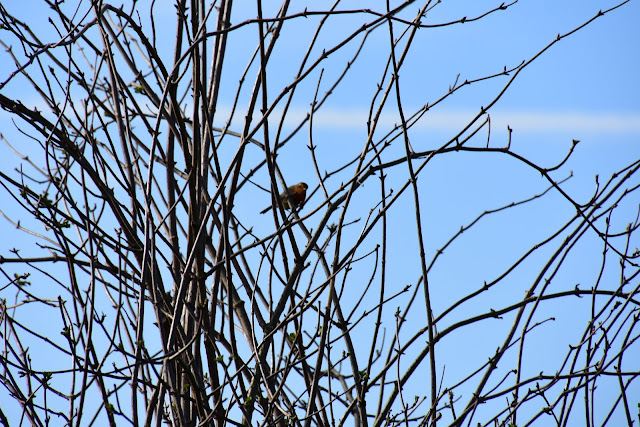 A Robin sits in a tree above the Cemetery 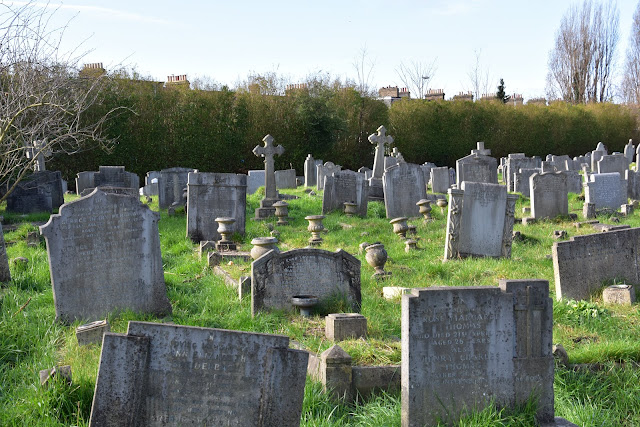 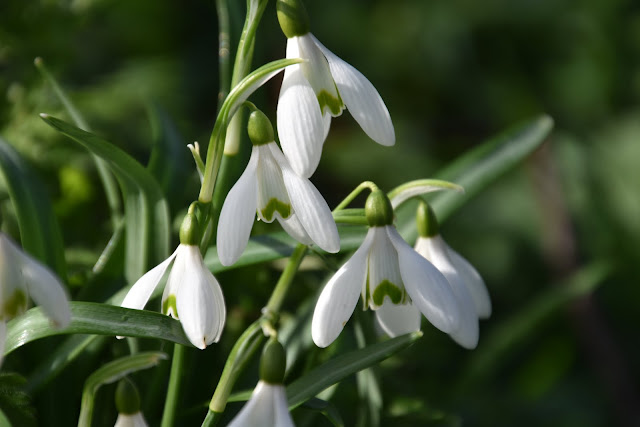 After this unusually tranquil visit to the Cemetery, I walked back to Crofton Park, where I was greeted by Kay and Steve, who built the community garden. I had met them previously at the London Recorders' Day in October 2018, and they explained to me the history of the garden, and their future plans to bring the community of Crofton Park even closer together. This wildlife garden is an inspirational one, as it has been a result of a strong community spirit: Kay and Steve are an amazing example of the people who strengthen the coexistence and understanding between people and wildlife, improving the wellbeing of visitors, as well as attracting many species: we owe a lot to them. Crofton Park Railway Garden is a haven for wildlife in the making! 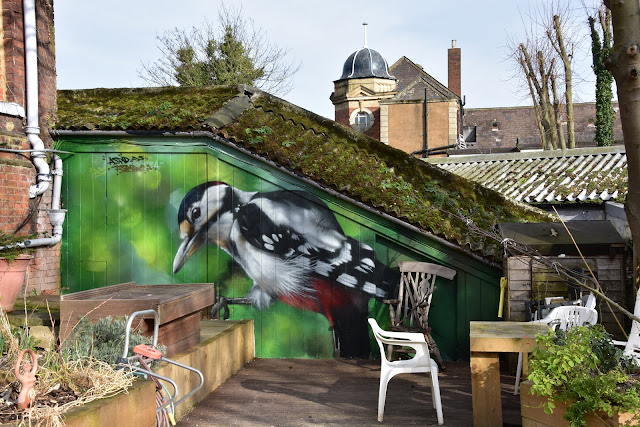 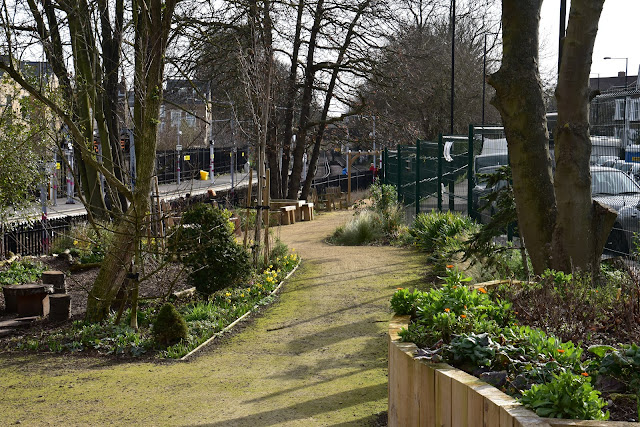 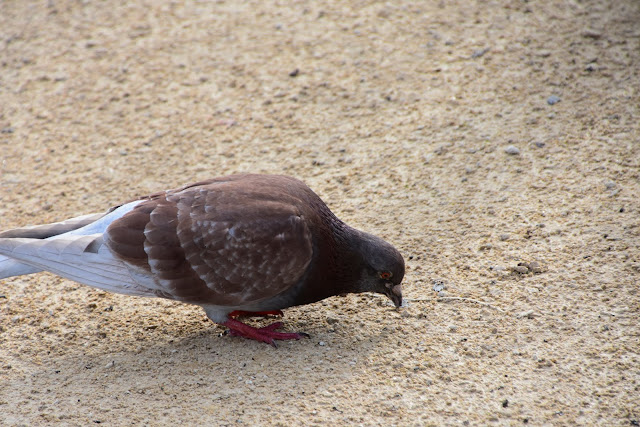 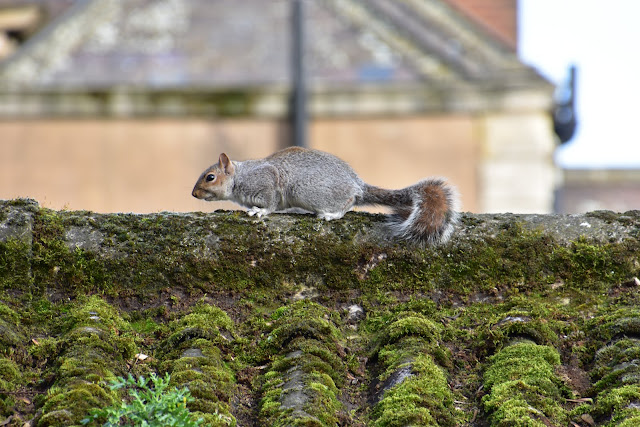 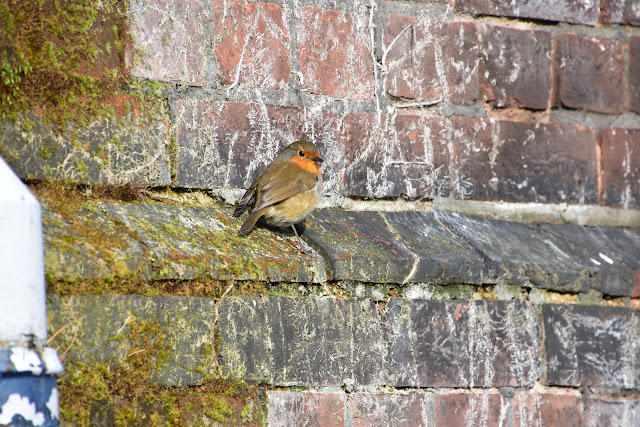 After visiting the Railway Garden, I travelled by bus through Brockley, to a bridge overlooking the railway. It was here where I would meet an inspiration of mine, the Director of Conservation at the London Wildlife Trust, Mathew Frith. Mathew was one of the first people to have the idea of creating protected spaces for biodiversity in London, and this has evolved into the 1605 designated wildlife sites we know in London today. He showed me around the northernmost tip of Lewisham's green corridor, the London Wildlife Trust's New Cross Gate Cutting. An hour was spent at this biodiverse railside: Mathew showed me around the site, and informed me about the London Wildlife Trust's work, its history and that of the populations of the many species found in the capital. While walking through the reserve, we managed to see Blue and Great Tits, Squirrels and a final glimpse of Fieldfares before their journey back to Scandinavia. The Cutting mainly consists of woodland, but has a small meadow, which can be a haven for reptiles in spring. I learned so much from Mathew in that hour, improving my perspective of London's biodiversity.

This brought an end to a short, but eye-opening visit to Lewisham. I can't wait to visit the rest of the green corridor soon! 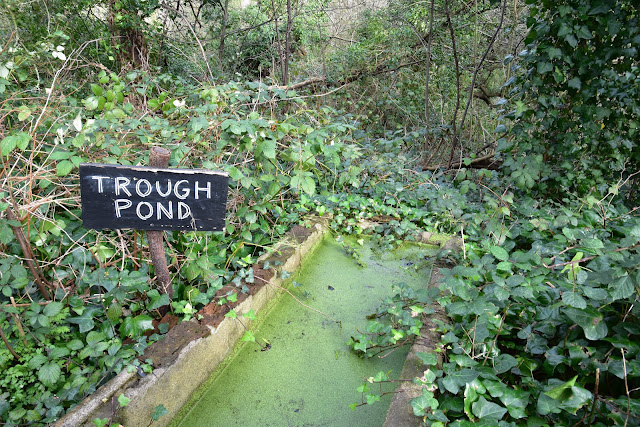 A small raised pond- something you can easily make in your garden or balcony! 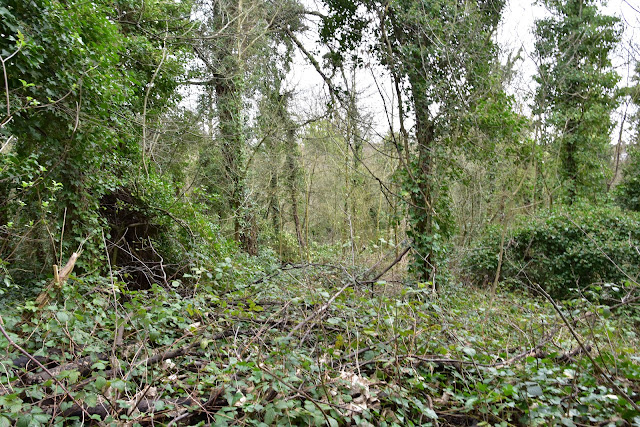 The dense woodland habitat which makes up most of the Cutting 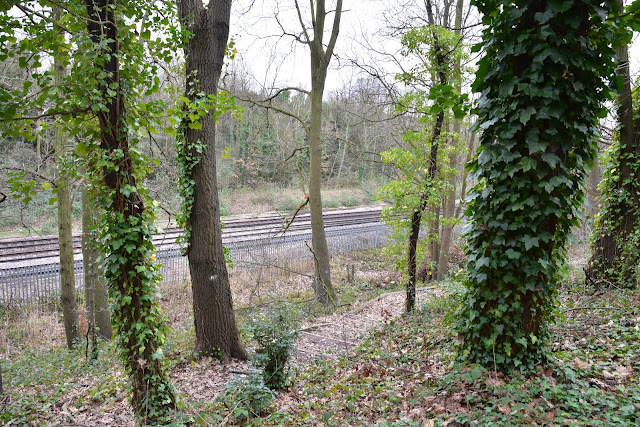 The track which all of Lewisham's green corridor sits beside 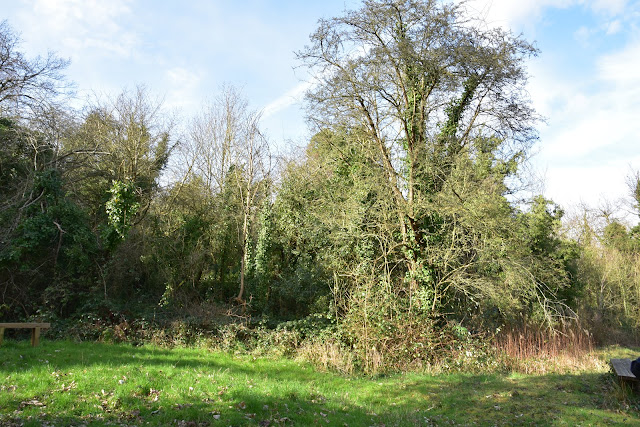 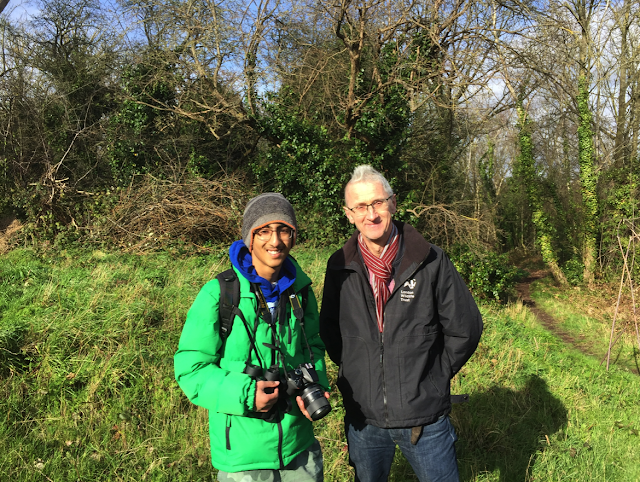 19th February 2020
On Wednesday morning I visited what is probably my favourite - the Barbican Wildlife Garden, in the City of London. From a magnificent wildflower meadow in June or the chatter of House Sparrows in February, this tiny community garden, thanks to the dedicated volunteers there, has improved the Square Mile's biodiversity significantly. It was wonderful to see Allison, Jo, Nic (who runs his own garden near Tower Hill Station), and Jules, the London Wildlife Trust's entomologist. It was wonderful to see their new stairs, which has further connected the Wildlife Garden with the rest of the Barbican Estate. Many Frogs could be seen in each of the ponds, including a mating pair, and lots of frogspawn! Jules informed me there were Stag Beetles too, as the log piles had come from Epping Forest: there were not many invertebrates under the logs that particular day, but the highlight was a small Centipede.

This remarkable garden will always give a new perspective of the natural world to you, each time you visit. So, if you have a spare Wednesday afternoon, please come and pay the Barbican Wildlife Garden's volunteers a visit: we have a lot to thank them for. 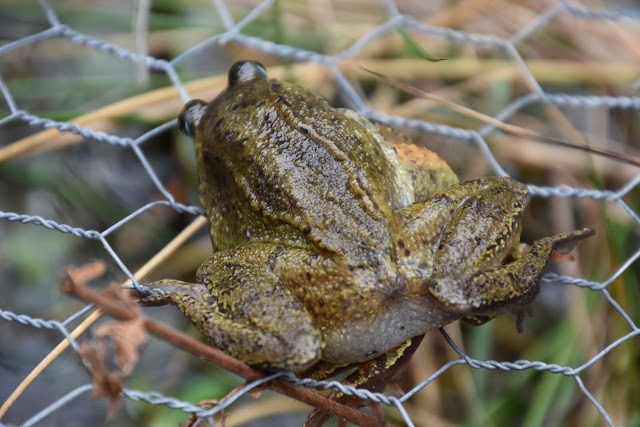 A mating pair of Frogs 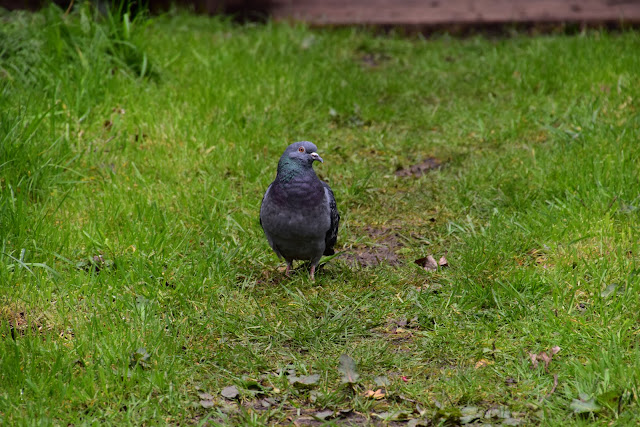 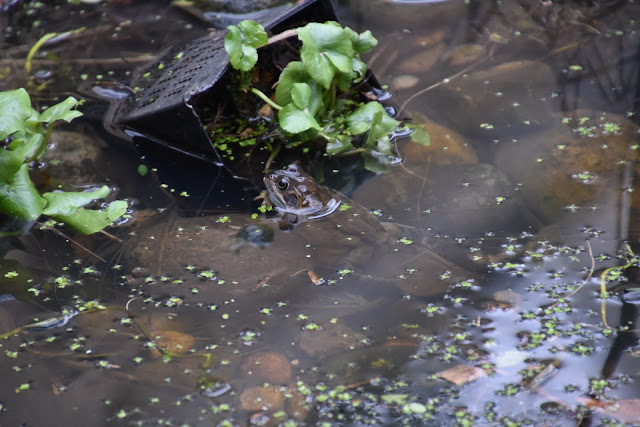 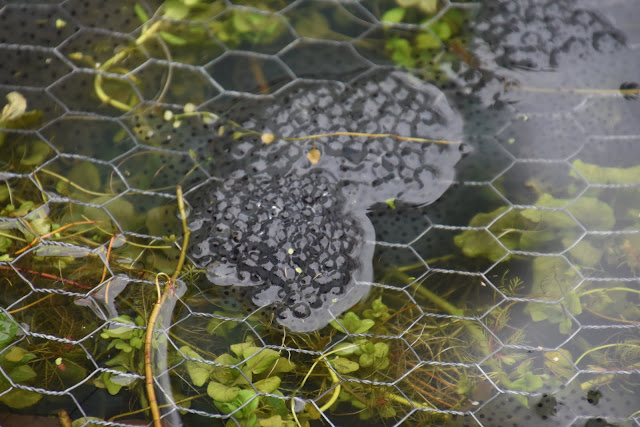 One of the many clumps of frogspawn 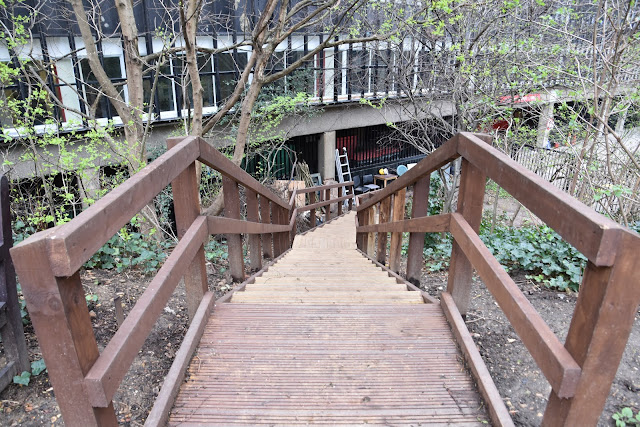 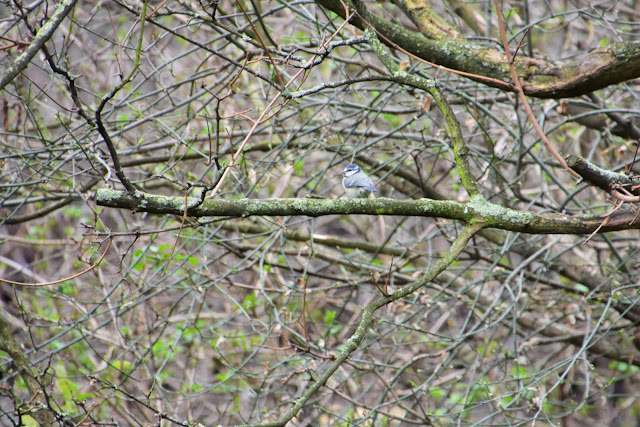 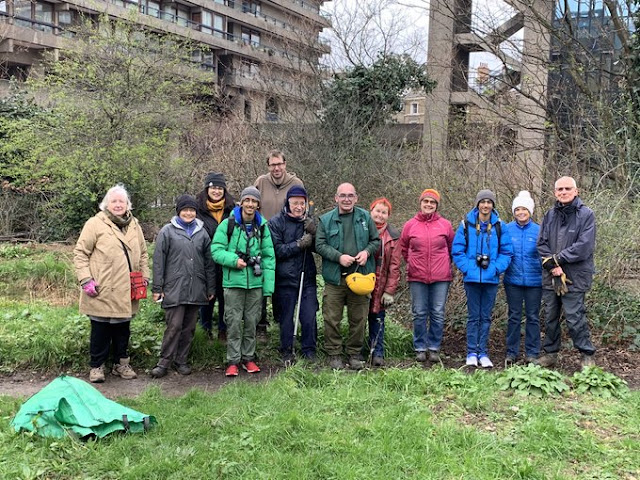 The volunteers at the Barbican Wildlife Garden


20th February 2020
Thursday morning took me a fifteen-minute journey on the Central Line to East Acton (how many stations are there containing 'Acton'??). Acton, derived from 'oak farm' in Old English, is a wonderful and historic town, and probably one of the only towns in London represented by areas bearing all four compass points. It is now the site of many new exciting, though sustainable, developments, and lies mostly in the London Borough of Ealing, with parts of it in neighbouring Hounslow and Hammersmith & Fulham. Nearby was a Local Nature Reserve, adjacent to a notorious prison of the same name. Wormwood Scrubs is famously the patch of The Urban Birder, aka David Lindo, an inspiration and mentor to me, and he was going to give my mum, brother and I a tour around the site!

As we walked around the Scrubs for two hours, David explained to us his experiences of birding on his patch over the years: how species populations have changed, the best places to see different summer migrants, the vast habitat distribution of the site, and how the Scrubs is on an important flyway, attracting various rarities over the decades. This made me think long and hard about how little time I spend on my own patch, Ruislip Woods in north London: I haven't yet explored the entire woodland for a start, and don't visit often enough. It is an overlooked site, despite being the capital's oldest National Nature Reserve, and perhaps there are rare species that have gone unnoticed? David's words made me come to the conclusion that I must discover my patch in a lot more depth, and enjoy visiting more, by viewing it in a different angle each time: this could be through the species I look for, or perhaps the seasons. There is a lot to be discovered on a local patch, whatever its size or surroundings.

As we walked through the dense, saturated scrubland, just metres away from a legion of cranes and development in Old Oak and East Acton, it made me appreciate how rich in habitats the capital is. In front of the central London skyline, Common and Black-headed Gulls fed on the fields, and the gasholder frames of the once-dominant Kensal Green Gasworks seemed conquered in magnificence by the brutalist masterpiece of Trellick Tower in North Kensington. Wrens sung their machine gun-like symphonies from within the scrubland, and a flash of orangey-brown appeared in front of the path: 'a male Stonechat!', David cried. Seeing a Stonechat was highlight of the visit! 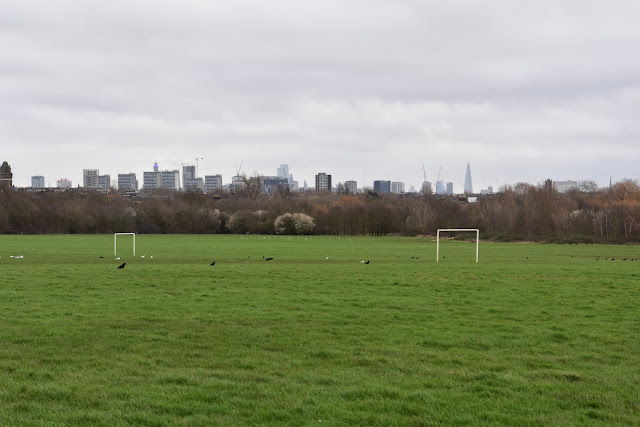 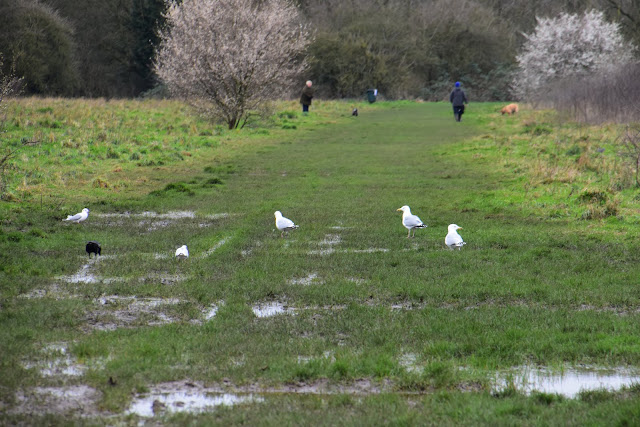 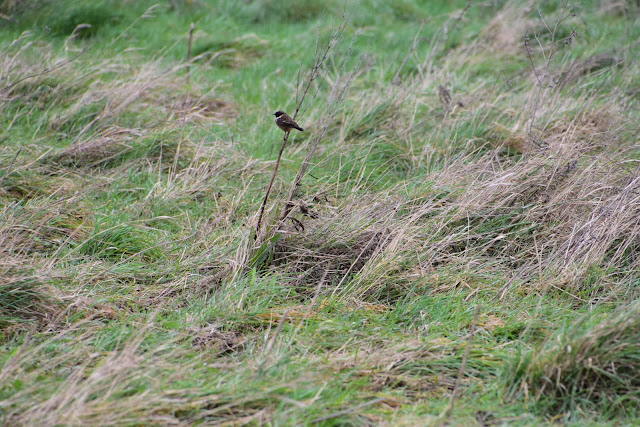 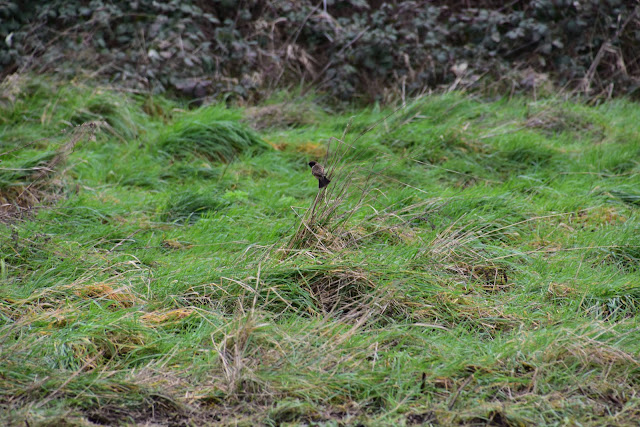 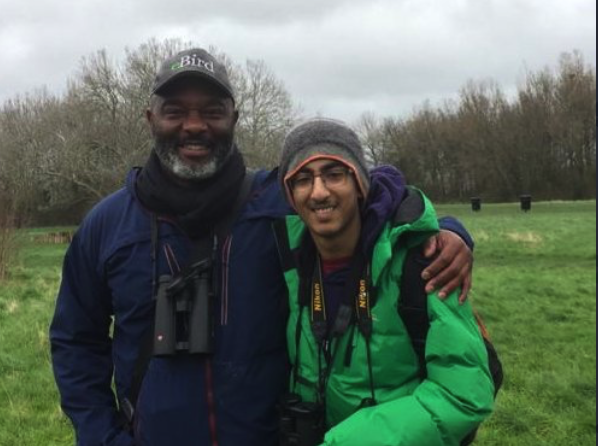 This half term gave me the opportunity to meet old faces and new, all working to preserve our capital's green and blue spaces: it is always wonderful to see the great community spirit achieved when people are connected by nature or their doorstep, and in these most uncertain times, it is needed more than ever. Let's all take this opportunity by noticing, appreciating and protecting the wildlife in our gardens and balconies, such as building ponds, planting wildflowers and growing vegetables. This will improve our wellbeing massively, boost our inner confidence and allow us to reconnect with nature; a haven and sanctuary especially in this crisis. And while exercising at our local green spaces, let's keep an eye out for wildlife, and perhaps discover new routes and pathways along our journey. I have immense hope that we will get through this together, with strength and confidence given by the wildlife on our doorstep. Perhaps once this is all over, we will all view the natural world constantly in different angles.

Stay safe everyone.
at 05 April No comments: