This is my first post in a while! In October, I had the privilege of attending the bicentenary celebration of the opening of the Regent's Canal. Eighteen barges from the St Pancras Cruising Club travelled from Browning's Pool in Little Venice to Limehouse Basin to mark the occasion, commemorating an elaborate procession of boats and brass bands led by the Earl of Macclesfield, that took place in August 1820. In July, I had also taken part in a podcast for the London Design Festival to commemorate the bicentenary, where I gave a short tour of the stretch between Angel and Haggerston.
I feel very lucky to have a personal connection with the Canal: I was born at St Mary's Hospital, which faces Paddington Basin, and frequently visited family in the area when I was little, so Little Venice was a very familiar sight. This time, it was fabulous to see the area through a different angle, noticing just how much biodiversity can be found there! 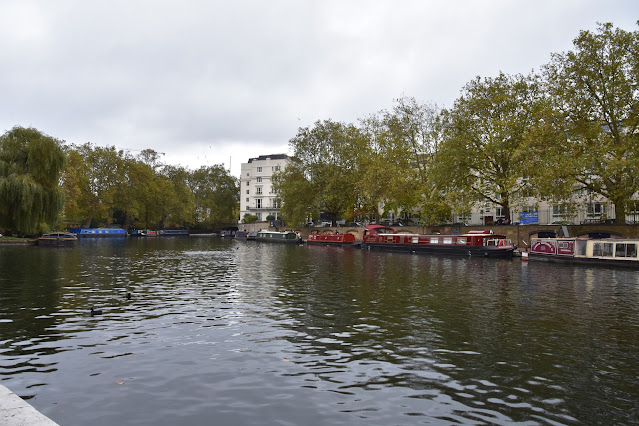 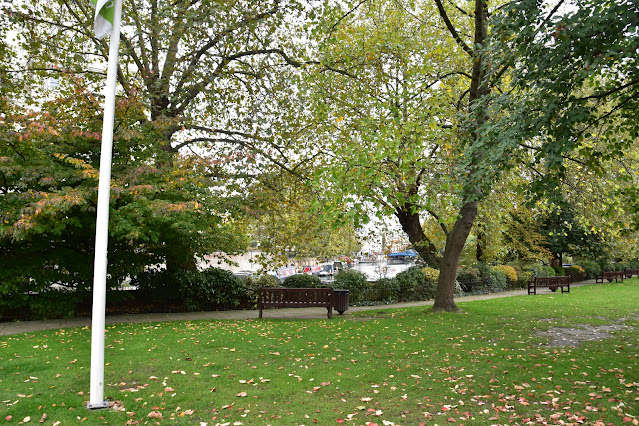 Designed by John Nash, Thomas Homer and James Morgan, the Canal is situated entirely in the Historic County of Middlesex, and its original purpose was to transport goods such as coal and timber by boat, with horses carrying out a similar job on the towpaths. Over time, the industrial landscape fell into disuse, with the last horse-drawn commercial journey taking place in 1956, and boats stopped transporting cargo in the 1960s. From then, the purpose of the Canal gradually evolved into one that puts people first: the towpaths were redesigned, and as people became more passionate about the Regent's Canal, many community groups and organisations were set up, making the Canal what it is today. Many aquatic plants were planted over time, attracting birds, mammals, fish and invertebrates, and several green spaces surrounding the Canal have become nature reserves and designated Sites of Importance for Nature Conservation.
Now, the Regent's Canal is a place where people and nature have the potential to thrive together. Some of the star species to see are Kingfishers; Cormorants; House Sparrows, the 'Cockney sparra', whose population is in severe decline; Emperor Dragonflies; Seals nearer to Limehouse Basin; Mute Swans; the odd Yellow-bellied and Red-eared Terrapins; and Coots, which are some of the most resilient birds in the capital, learning to use just about anything to build their nests. 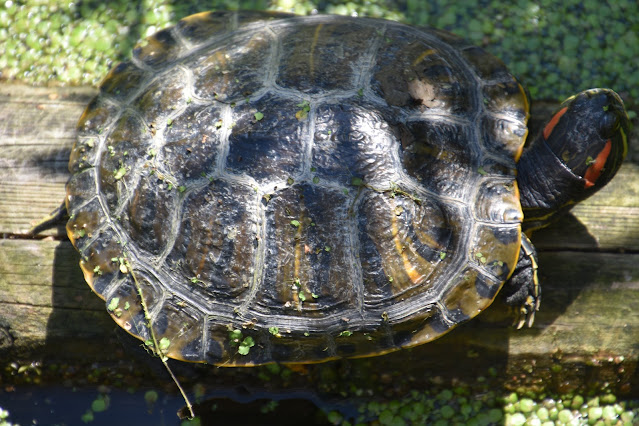 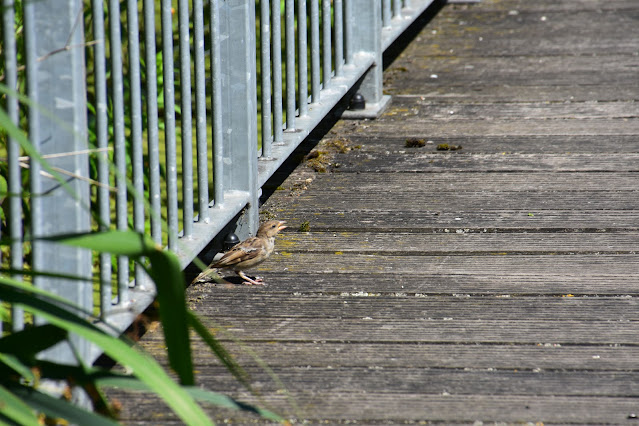 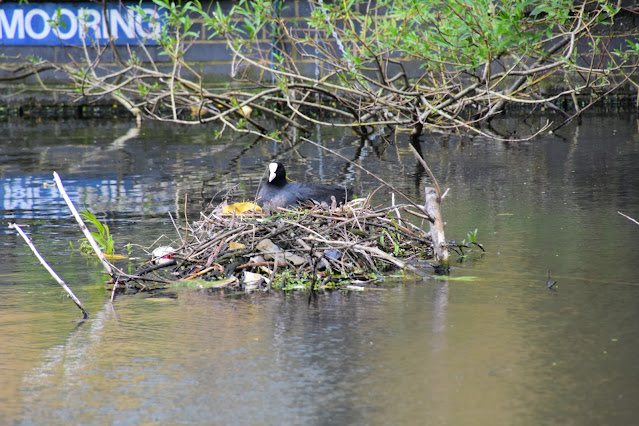 The Canal and River Trust work closely with the volunteer groups that manage different stretches of the Canal, and as part of the celebrations, two sites were given green flag awards to recognise their conservation work: Kingsland Basin, a fantastic nature reserve in Hackney run by the Wildlife Gardeners of Haggerston; and the Lower Regent's Canal. 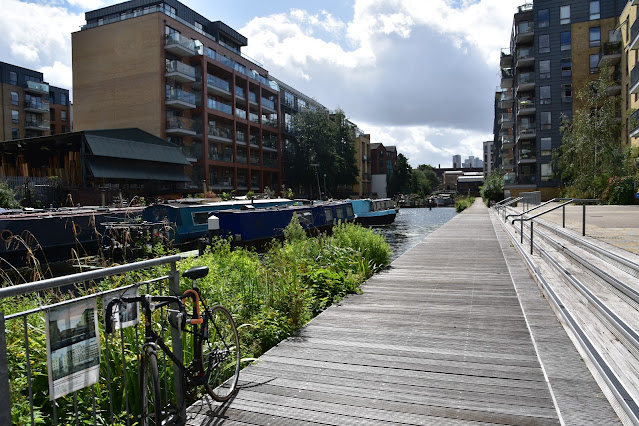 Kingsland Basin received a green flag award for its conservation efforts, as part of the bicentenary
That day, I was being interviewed by Lucy Greenwood from the Trust, sharing my thoughts on the history of the Canal, what wildlife can be found there, how people can get involved when they visit, and my vision for the next two hundred years. 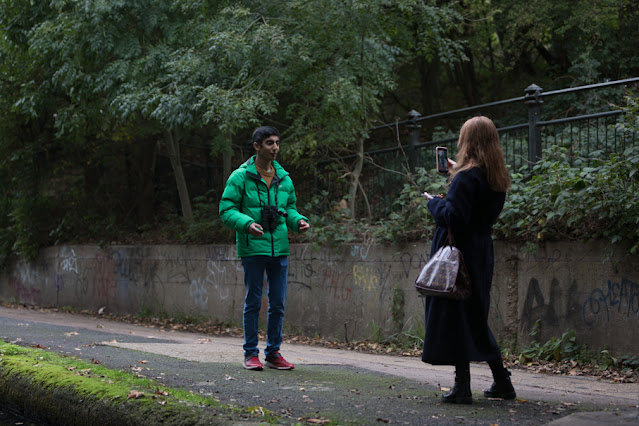 Being interviewed by Lucy Greenwood, Canal and River Trust
The interview took place at Macclesfield Bridge, just outside Regent's Park, in a most beautiful, countryside-like stretch of the Canal. The dense foliage was starting to show its autumnal colours, and a Kestrel darted overhead; a stark contrast to the towering 19th Century footbridges that spanned the waterway, reminding me how much the Canal has transformed over the past two centuries.
The bridge's nickname, 'Blow-up Bridge', comes from a notable incident in 1874, when a boat named The Tilbury approached the bridge, carrying gunpowder. Gunpowder was too dangerous to carry on the railway, so the only option was to transport it by boat. As The Tilbury passed under the bridge, it exploded, killing three men and a horse, and Lucy informed me that the adjacent Plane Tree has been scarred from the explosion! 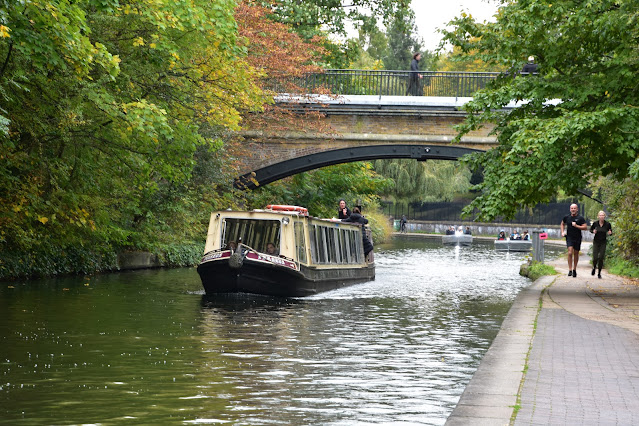 One of the boats taking part in the flotilla 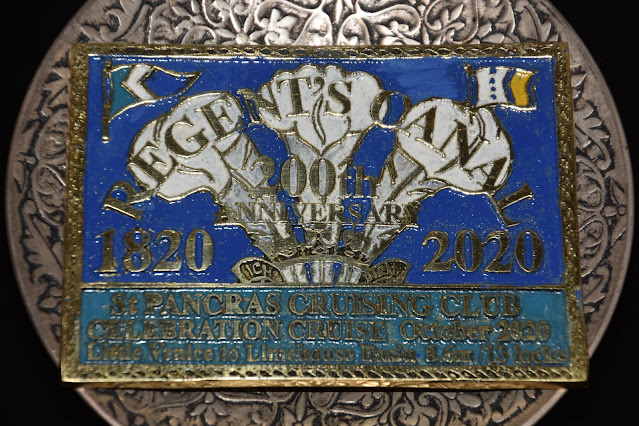 It has been an honour to be involved in this memorable celebration of the Canal, and learn so much about its biodiversity and history. I hope that the next two hundred years will see more exciting stages of evolution in the Canal's history, to benefit both people and wildlife.
at 04 December No comments: