Here are a few events that have happened over the October Half Term:

23rd October 2019
On Wednesday evening, I visited the Mall Galleries, where the Society of Wildlife Artists (SWLA) hold their annual exhibition, and during this time, many functions are held. One of these is the BTO Annual Awards Ceremony, where the organisation presents the Dilys Breese Medal and the BTO Marsh Awards for Ornithology, Local Ornithology, Innovative Ornithology, International Ornithology and Young Ornithologist. I was humbled to be this year's recipient of the Marsh Award for Young Ornithologist: I am very grateful for this honour, and from it, I hope more attention will be drawn to Nature Reserves of London, for more people to explore the wild side of the capital. I received the award from Charles Micklewright of the Marsh Christian Trust and Frank Gardner, President of the BTO.

It was a fantastic evening, catching up with friends and making new ones, and it was memorable to meet the other recipients: Lesley Dolphin, Dan Chamberlain, Mike Smart, Gabriel Gargallo and and Petr Voříšek. What a memorable and fabulous evening! 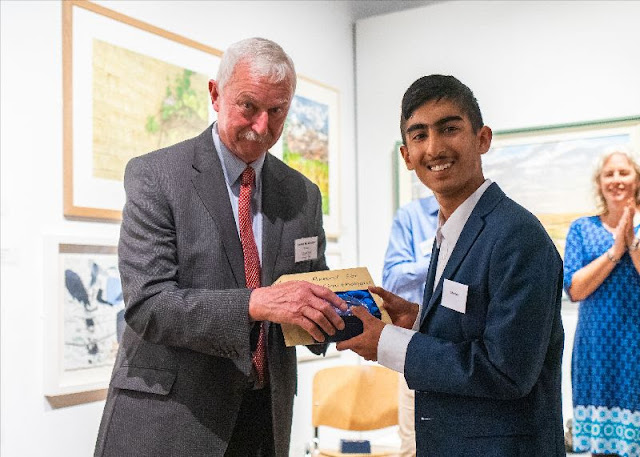 Receiving the Marsh Award for Young Ornithologist from Charles Micklewright

27th October 2019
Saturday was the RSPB AGM, the first I had attended. Rachel Gardner, another member of the Phoenix Forum and I (now the RSPB Youth Council) were on the young people's stand for the morning, informing people about the RSPB's work with the younger demographic. It was great to meet James Miller again, and also the inspiring Dara McAnulty, both of whom made powerful speeches at the event. Between 11am and 1pm, the AGM was held, presenting the wide variety of events that the RSPB had been involved with, which was quite interesting. Unfortunately I couldn't stay for the talks after lunch as I had school homework! 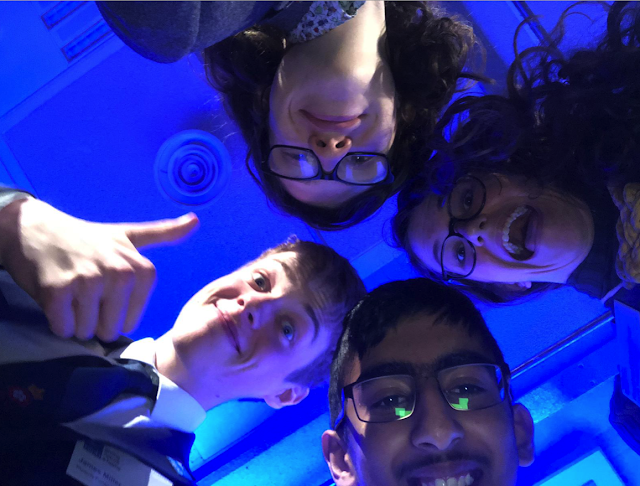 29th October 2019
This was one of the rare occasions I was going birding in south London, specifically in Sutton and Merton. I was was joined by a fabulous young birder, Arjun Dutta, whose patch I was going to visit: the first stop was Beddington Farmlands. Usually I see this reserve as a group of lifeless fields from my flat in Croydon (which I don't visit very often), so it was wonderful to see it up close in all its glory. We headed down a wooded area, where the song of Chaffinches and Blackcaps could be heard. The reserve's beautiful and unique landscape is interrupted by a massive incinerator, which is an eyesore even in my Croydon flat. The creators of this unwelcome visitor had reluctantly made areas for birding, achieving the bare minimum of a hide: some corrugated pieces of iron stuck together, with an opening too high to view the lakes. When we had finally managed to see through it, there were flocks of Starlings, Shoveler, Teal and Gadwall congregated about the lake. It's always magical to see urban wildlife at its best.

A campaign led by Peter Alfrey (whom I met the previous Wednesday) to restore Beddington Farmlands to its former glory has proved quite a success, with a 'friends' group being created and next boxes being placed. However the future of this landscape in Sutton remains uncertain, but let's hope it'll be for the better, benefiting London's wildlife. 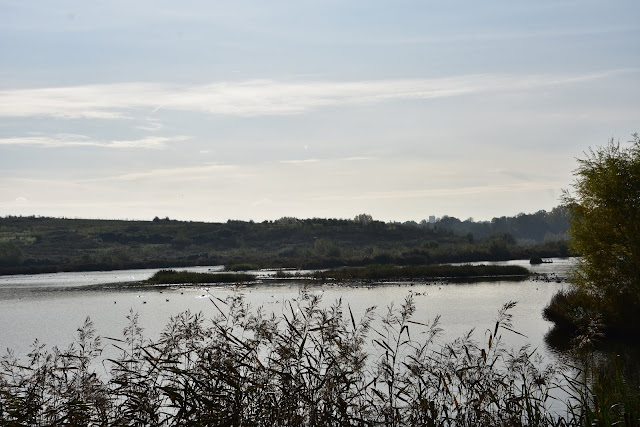 A lake at Beddington Farmlands 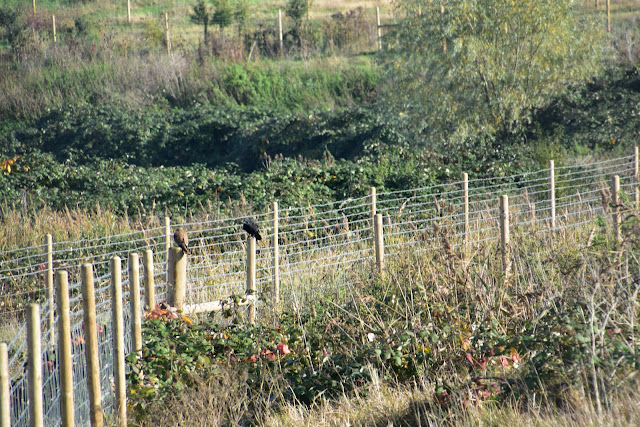 A Kestrel with a Crow 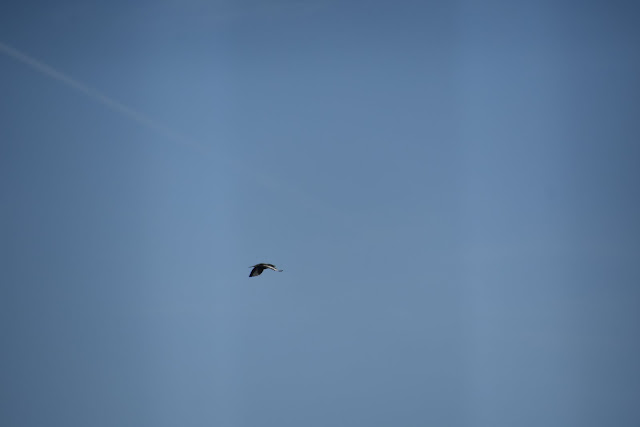 A leucistic Crow in flight 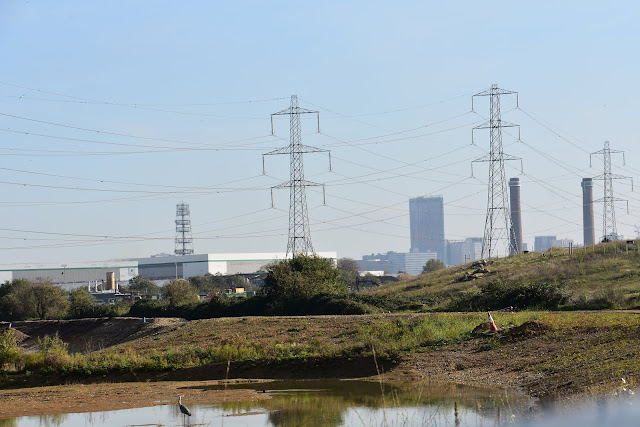 The skyline of Croydon can be seen from the hides 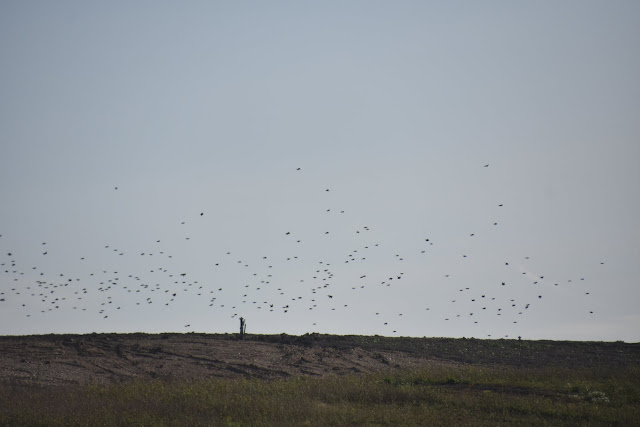 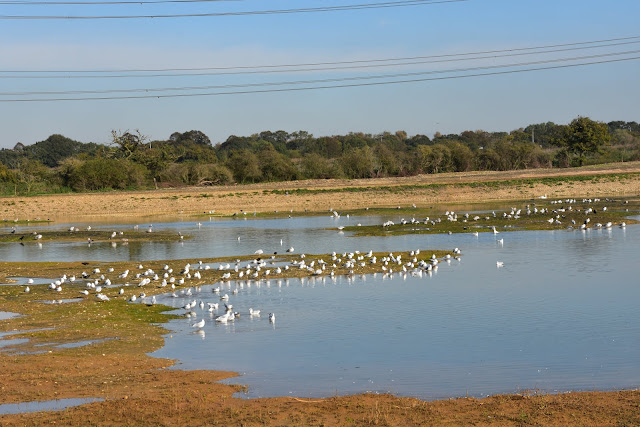 A large congregation of Gulls and Herons Gulls, Herons and Crows, in the shadow of the incinerator 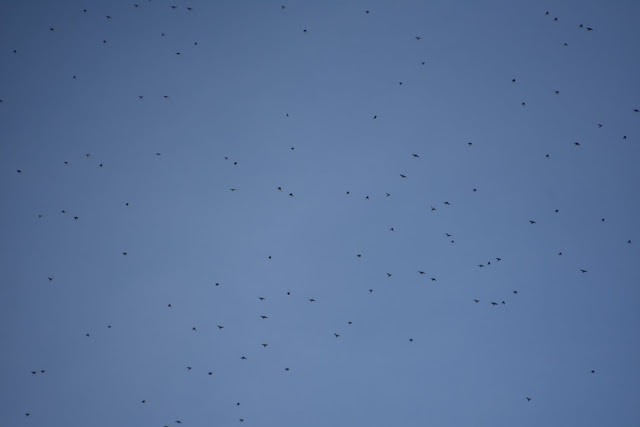 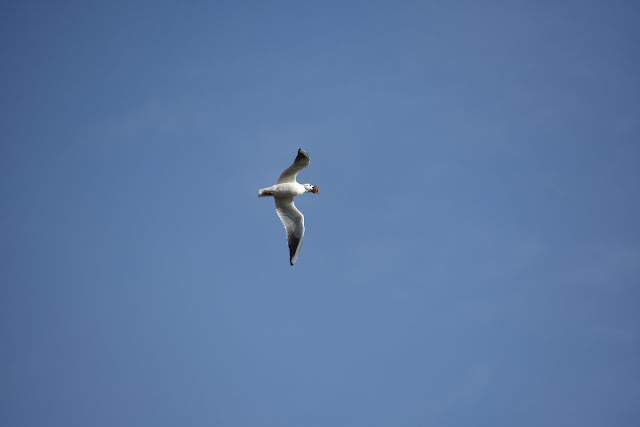 Our next stop was Morden Hall Park, Arjun's main patch. Owned by the National Trust, this vast expanse of what used to be a private estate is right in the middle of Morden, a bustling town in the London Borough of Merton. We crossed from Sutton to Merton via an old and neglected footbridge, over the Thameslink railway line. We walked through a segment of Mitcham Common, another Site of Importance for Nature Conservation (SINC), where we were greeted by cheerful Great and Long-tailed Tits. This green corridor abruptly stopped at Mitcham Junction. Arjun told me the quickest way to travel between the sites was by tram- a form of transport which I had never used before. I found it fascinating how the tram blended in with the leafy suburbs of St Helier, Hackbridge and Morden. We got off at Phipps Bridge, and headed towards the park.

Arjun gave me a tour of north end of the Park, walking around the moat surround Morden Hall, diversions of the River Wandle where Kingfishers are found, and a new marshland which he helped to create last year. At this new marshland, we saw Long-tailed Tits and a few Moorhen, but Arjun had seen Snipe there recently. All of a sudden, a peculiar call was heard over the Park- we're still trying to figure out if it could be a Snow Bunting! Arjun then explained to me that Cetti's Warblers there are the most elusive he had seen anywhere, and that Wrens hide in the undergrowth, as if they were scurrying mice- I could see clearly that through careful habitat management, even in an urban area, waders, warblers, among other migratory species, can all flourish, with minimum disturbance.

We then headed out of Morden Hall Park itself, and passed Deen City Farm, outside which cows lowed peacefully in their pasture. Beside the Wandle, an excellent habitat for Kingfishers, a tit flock was present, and we struggled to take photos of it, while bearing the weight of our massive cameras. We returned to the marsh shortly after, and stopped for lunch, surrounded by the sights and sounds of Redwing, Fieldfares and warblers. 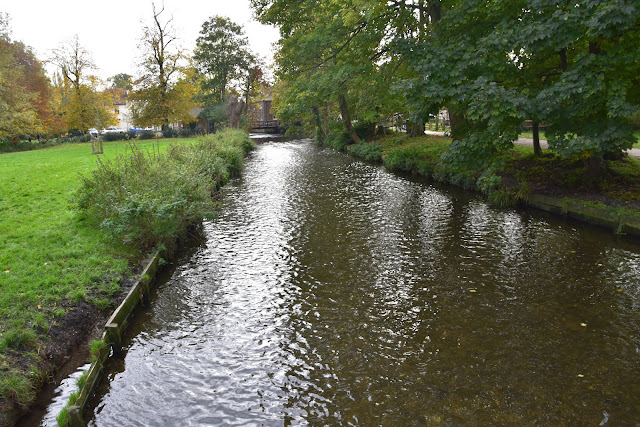 The moat around Morden Hall 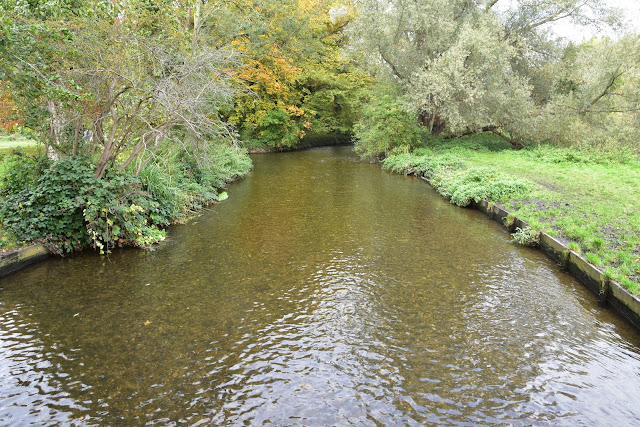 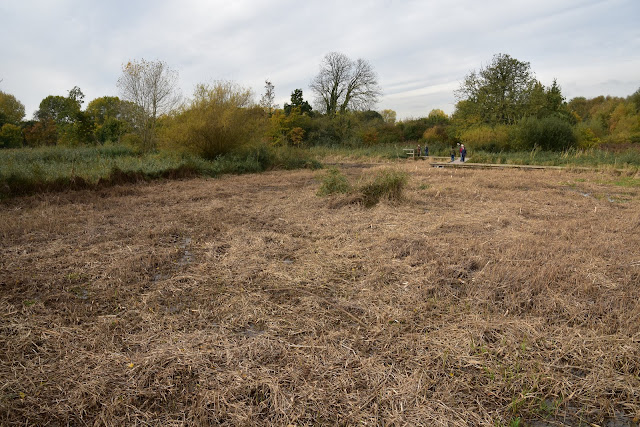 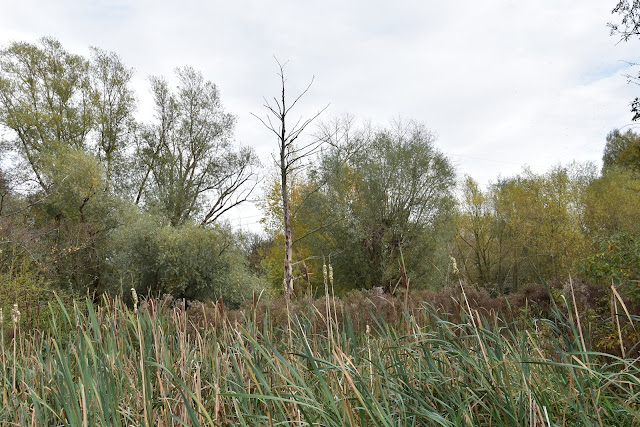 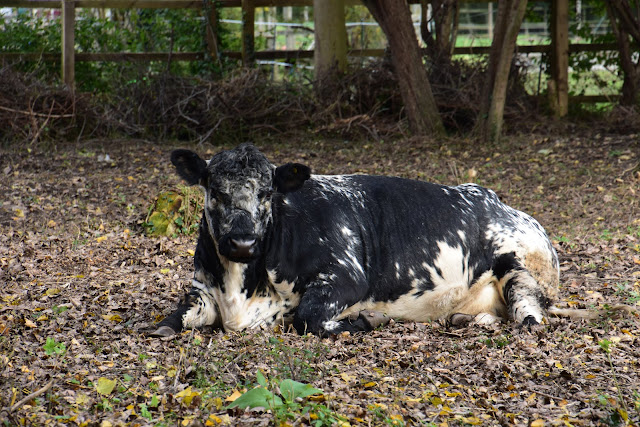 A cow sitting peacefully in its pasture 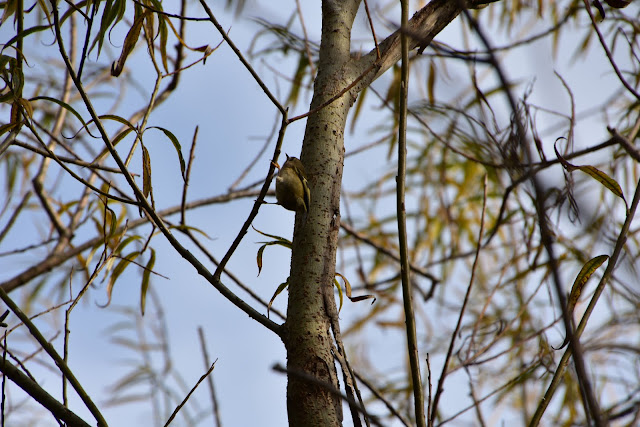 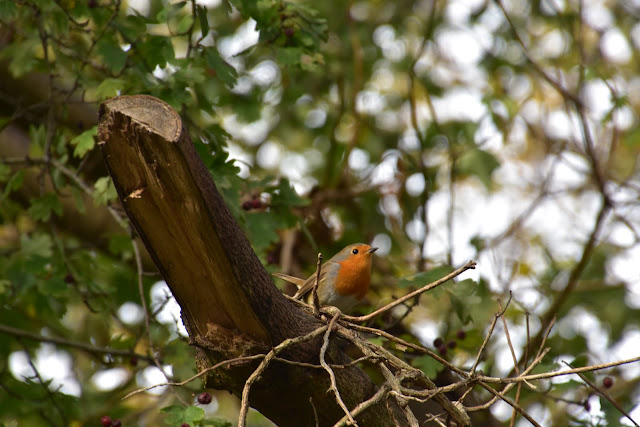 After lunch, Arjun showed me the south side of the reserve, a boggy area created by the Wandle. This was where it flowed just metres away from the busy high street. After doing a short circular walk around the Park, we finished at the quaint garden centre at the entrance. What a fabulous first time birding south of the Thames!

30th October 2019
In the evening, I returned to the Mall Galleries for another reception, this time with the Cameron Bespolka Trust. It was wonderful to catch up with the other young ambassadors, and meet many people with connections to the Trust and the RSPB. It was also a great opportunity to see the artwork, which was superb!

31st October 2019
On Wednesday I visited the fabulous Walthamstow Wetlands, the flagship reserve of the London Wildlife Trust for the first time! Unfortunately the main part, the south side, was closed, so I ventured to the north side, which didn't disappoint whatsoever! It's always magical to see the contrast of the London skyline with the capital's wild side, and here I felt it the most: nestled in the Lee Valley in Waltham Forest, the Maynard and Lockwood Reservoirs are teeming with waterbirds, while Peregrines soar above- some of our urban avifauna at its finest. I met local birders Lol Bodini and Dave Bradshaw, who I see frequently post sighting on the London Bird Club page- a useful tool to look for uncommon birds in the capital. They had found a Brambling, a migratory finch which can be sometimes seen around the reservoirs. It lay silent in bushes, and I was told that it had been feeding calmly, undisturbed by passers-by.

I decided to check on the bush later on, and walked beside Low Maynard Reservoir. The repetitive 'mewing' of a Peregrine could be heard above, and many Tufted Ducks, Pochard and Great Crested Grebe swam about the lake. After hearing from Lol that there was no sign of the Brambling, I climbed up a steep hill, to find very choppy waters, not dissimilar to that of Staines Reservoir in Surrey. Again the Peregrine could be seen, and a Kestrel darted to and fro between the reservoirs, scanning for small mammals in the grass. Behind Lockwood Reservoir, amidst many tower blocks, the new White Hart Lane Stadium and Ally Pally dominated the horizon. After not bothering to walk the whole length of Lockwood Reservoir I headed down to High Maynard Reservoir, which is home to a Little Egret Colony. This lake was very quiet. 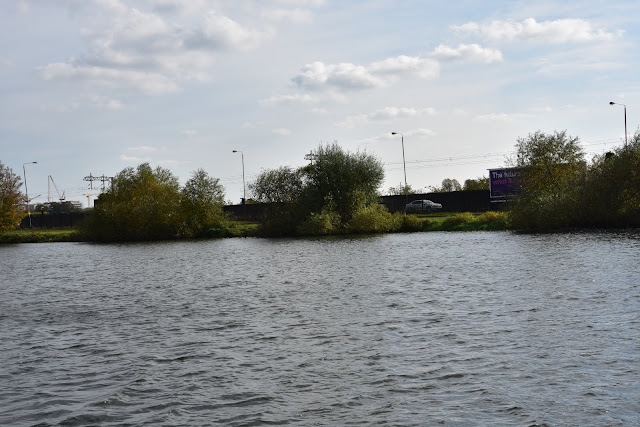 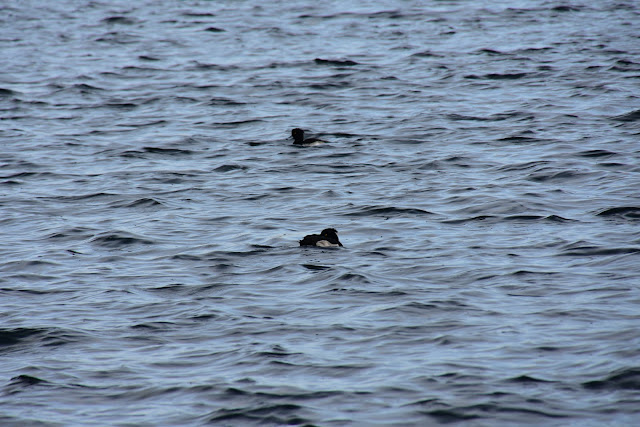 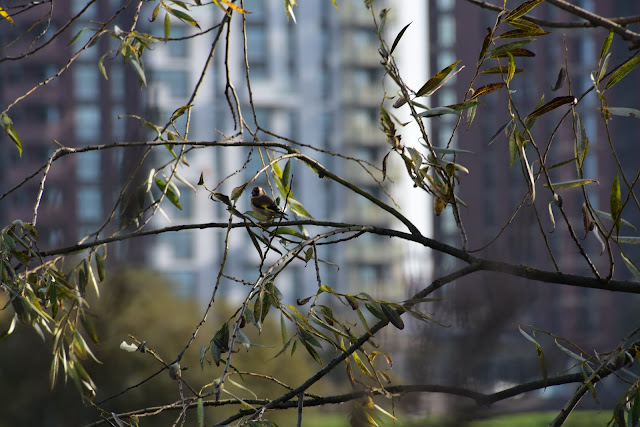 A Goldfinch sits in a tree overlooking Low Maynard Reservoir 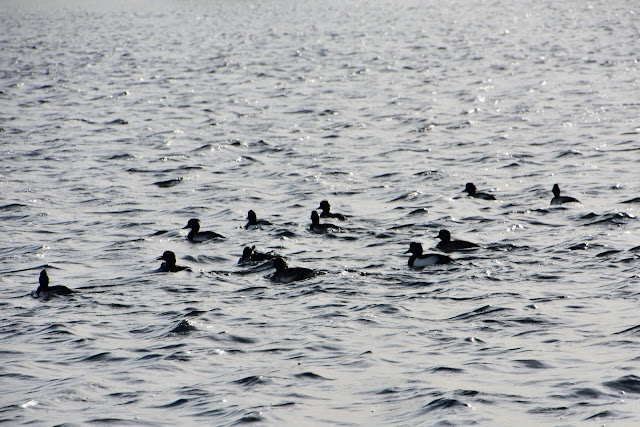 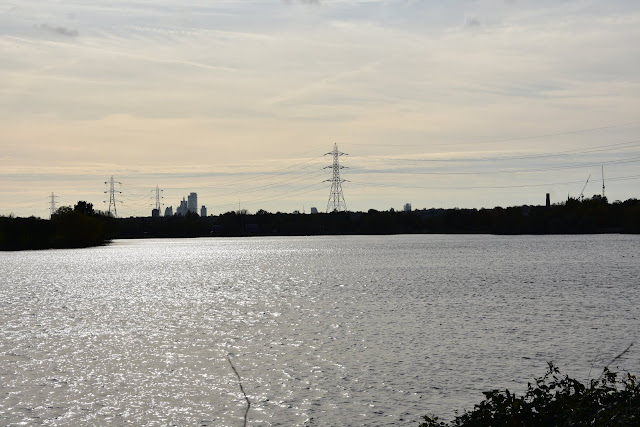 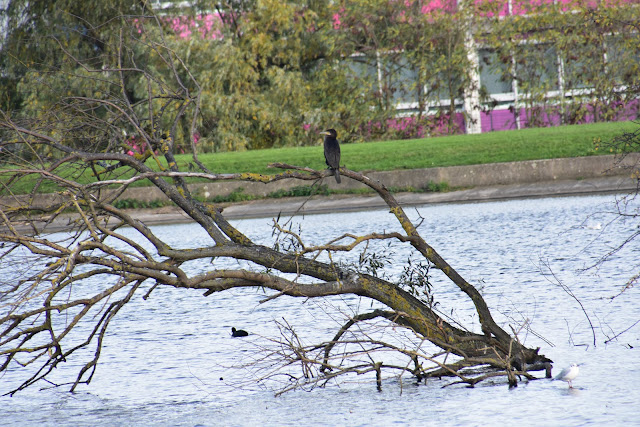 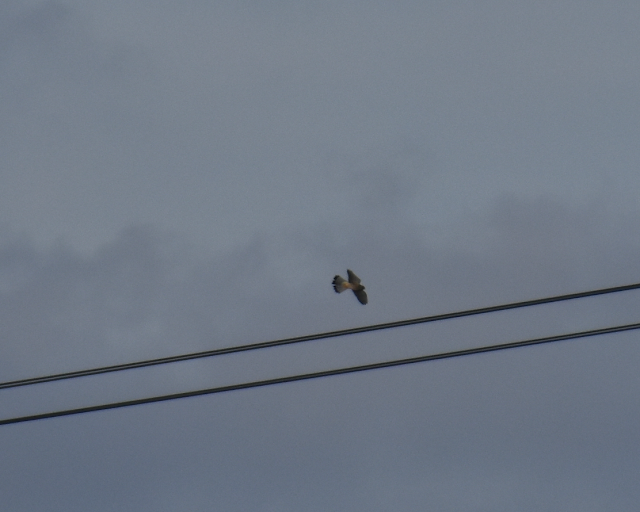 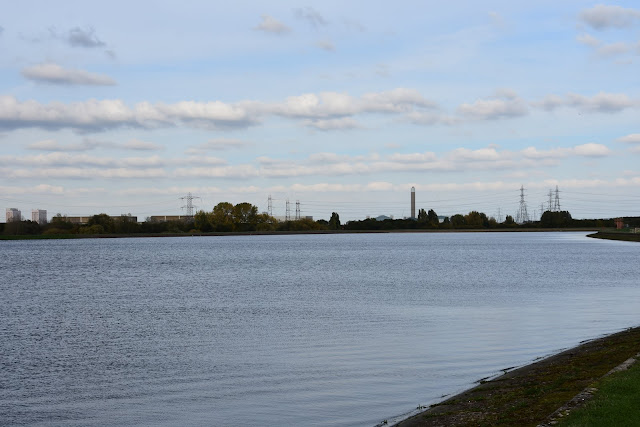 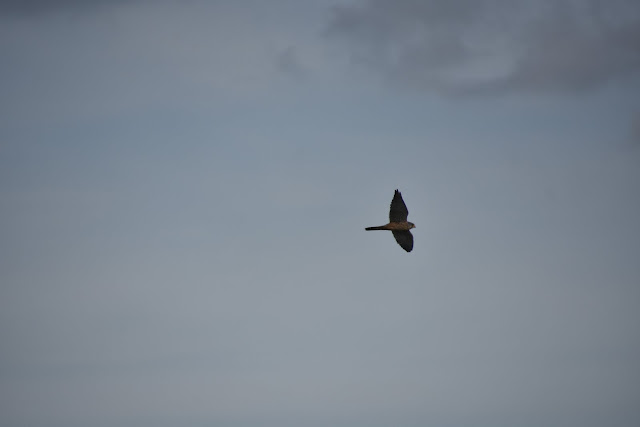 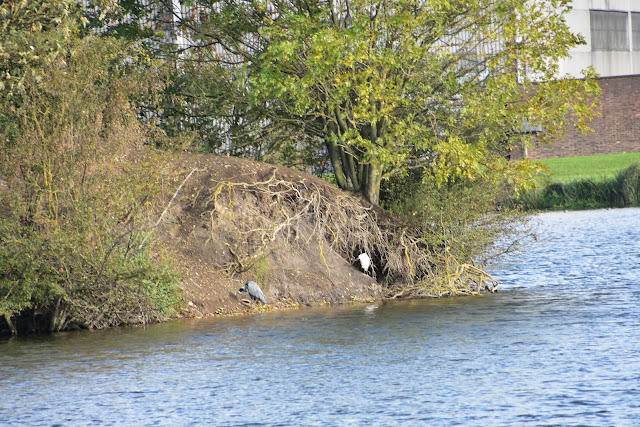 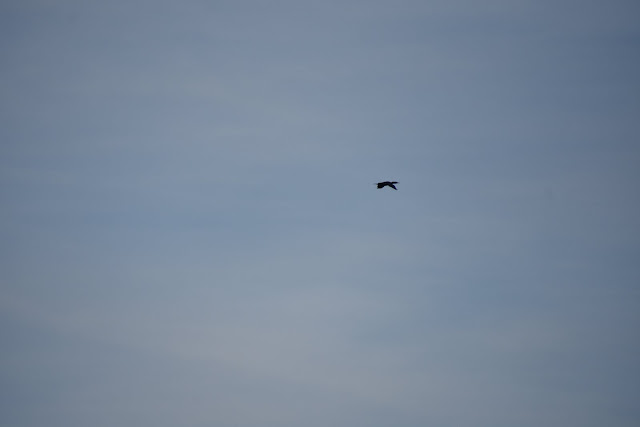 A Cormorant in flight

I walked back to the Engine House, where I was met by a huge inspiration of mine and leading figure in urban birding, David Lindo. We were going to do an interview for Radio 4, about being a young birder in London. We went back to the north side, where a local fisherman shouted to us that the Brambling had returned. I ran. And there it was, a beautiful finch, feeding on seeds in the dead grass. Suddenly, I noticed a massive boom mike speed towards my face, and the interview had begun, with the Brambling being the audience. I was asked questions by David and by Helen from Radio 4 on how we can appeal birding to a wider audience, and what can young people in London do for nature. It was all very exciting!

4th November 2019
On the last day of this wonderful half term, I visited Westbury Banks Nature Reserve, for the first time since Luke Newcombe introduced me to it in July. It was great to see it in a different season, and we were going to build a bird hide! Luke and his volunteer group, Boris, Charlie and Jessica manage the reserve every few weeks, and we chose a spot for the hide to be built, overlooking the pond and within a forest-like habitat. We used a mini-sledgehammer to put four wooden stakes in place, and then nailed a circular wire mesh around the top to it, almost looking like a 360-degree hide. Finally, we put a camouflage net over the mesh, and the structure of the hide was complete! It took one-and-a-half hours for us to build it, and it was built entirely out of recyclable material! We will soon add wooden slats, a pathway and a gravel flooring to the hide to complete it, and I was humbled that it has been named the Kabir Bird Hide!

What a fabulous half term I have had exploring the wild side of the capital, and can't wait to continue! 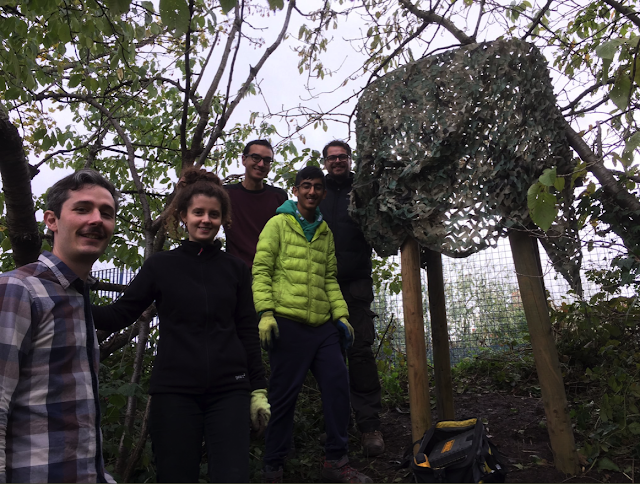 With Boris, Jessica, Charlie and Luke after completing the main hide