The One Show: Kaul of the Wild


Yesterday, an episode of BBC One's The One Show aired a film of me watching seals in Norfolk with Mike Dilger. When did this all start?

Well, At Birdfair last year, I bumped into Mike Dilger, a naturalist and broadcaster, who is a reporter for The One Show. I had written an article in RSPB Nature's Home Magazine for him, and he had an idea of featuring me on the Show, birding around my patch, Ruislip Woods. I did many audition videos over the coming months, around my garden, showing how I keep it wildlife-friendly, not keeping my hopes up too high. Then in October, Tigress Productions, the wildlife-filming team on the Show, said they were going to go ahead with the filming! Except the plan was extremely different. I was going to Great Yarmouth...

17th November 2018
At the Premier Inn which my family and I were staying in, at breakfast, I met the crew: Mike (presenter), Max (director) Robyn (sound) and Tom and Annabel (cameras). Afterwards, we headed to Horsey Gap, the first filming location, not known to me at the time that this was where Grey Seals mated and bred (since it was a surprise). I was wired up with a tie-clip mike, and the crew and I headed up the steep hill to the Gap. On the way up, I saw my first Skylarks, six of them, and a skein of my first Barnacle Geese.

Suddenly, on the shore before me, lay fifty Grey Seals. There were the calm females, looking after their cute little pups, days old, and lay there like lumps of snow dotted around the shore. Then, there were the testosterone-fuelled males, protecting their harems of females from other males: when another male would approach, they would chase each other around, and we were hoping this would start an epic fight, which unfortunately we didn't get to see.

However, it was wonderful meeting Peter Ansell, a warden at Horsey Gap, who informed us of how the seals are protected from plastic pollution and other threats, as well as their lives at Horsey in general. (Peter if you're reading this, you were right. Wood Green is not in Enfield. It's in Haringey).

We also did a brief seawatch, seeing my first White-fronted Goose, Red-throated Divers and Guillemot. Then, a group of twitchers nearby told us about a Rough-legged Buzzard they'd seen earlier, and in a flash, it appeared! What's more is that we got to see a Hen Harrier and a Rough-legged Buzzard in the same binocular vision! 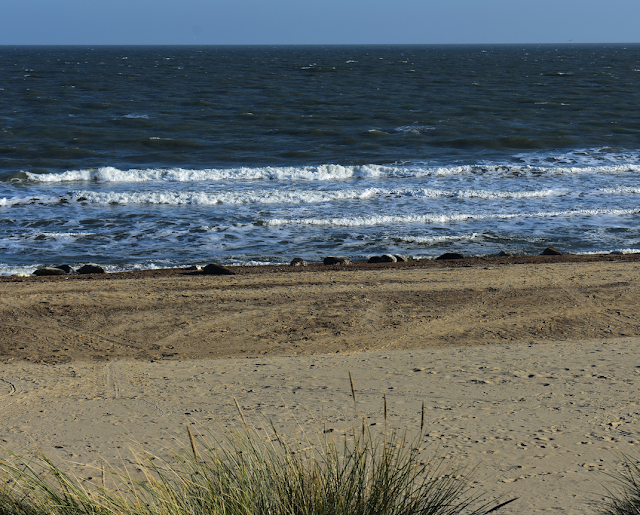 Females resting on the shore 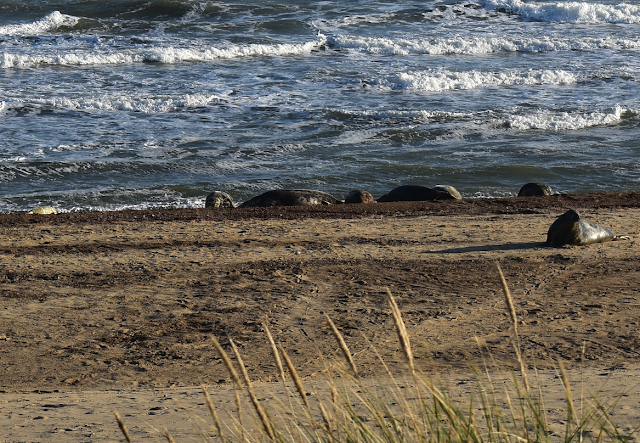 A little pup lies on the left, while a huge male looks after his harem 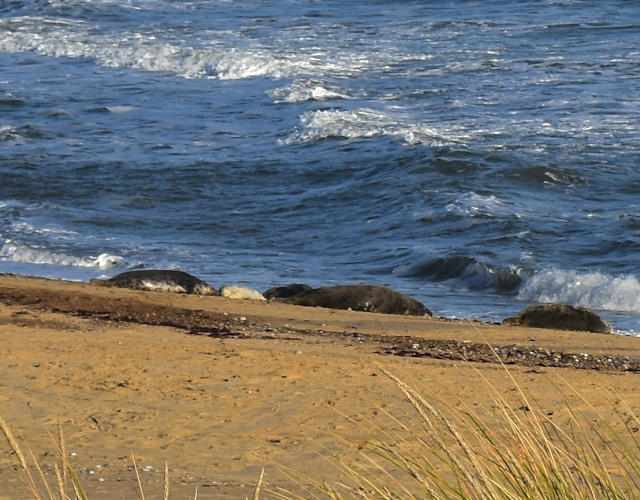 Females with a pup 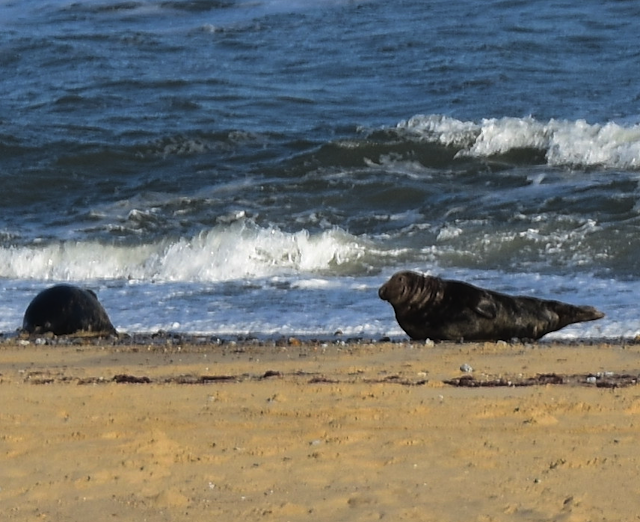 A seemingly happy male lumbering on the beach 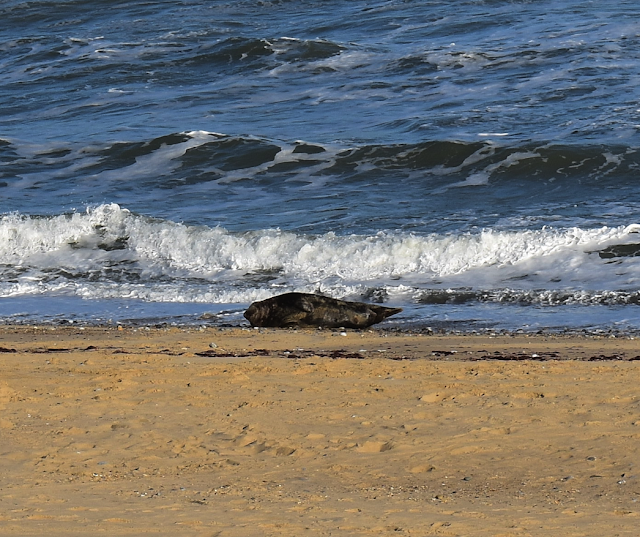 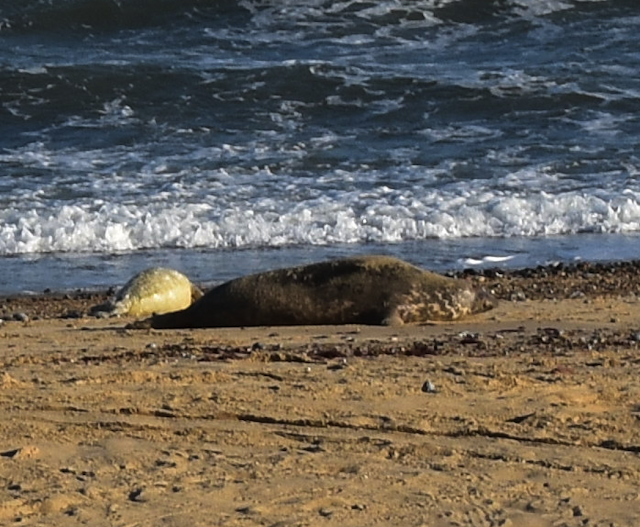 A female with a pup 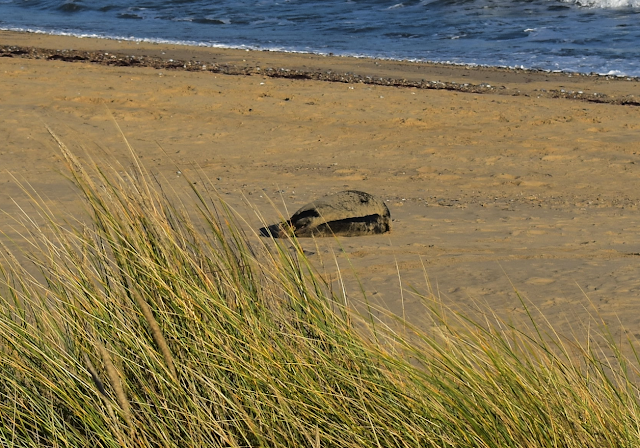 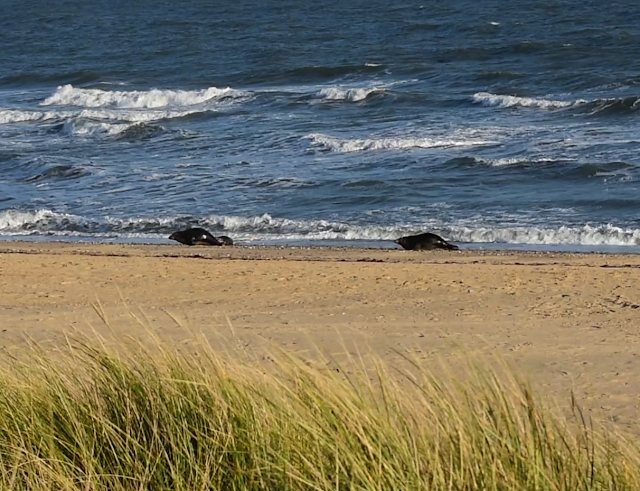 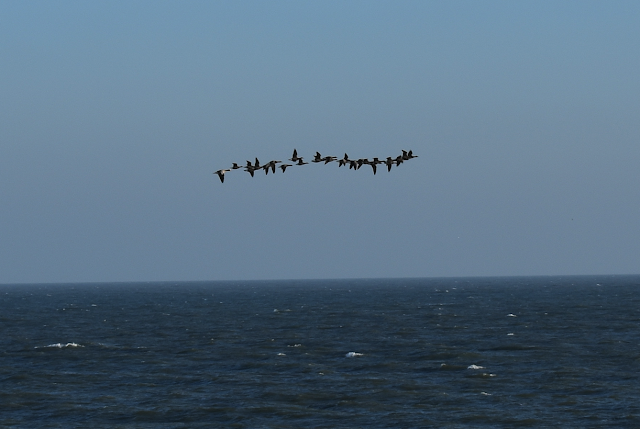 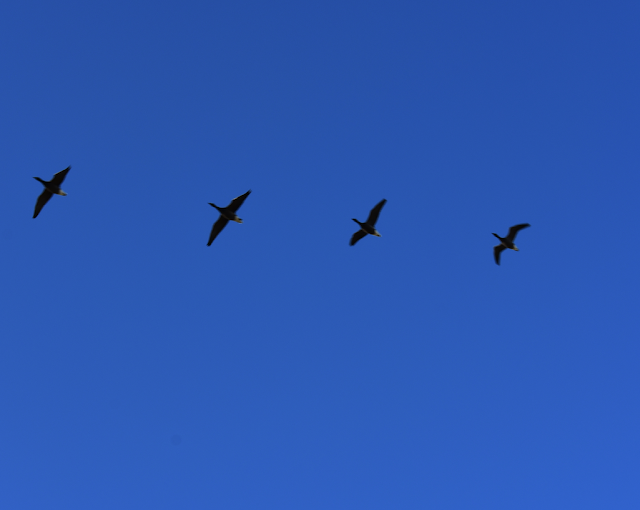 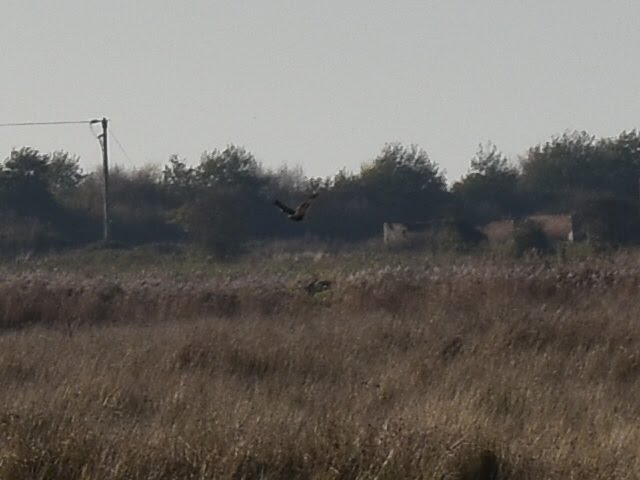 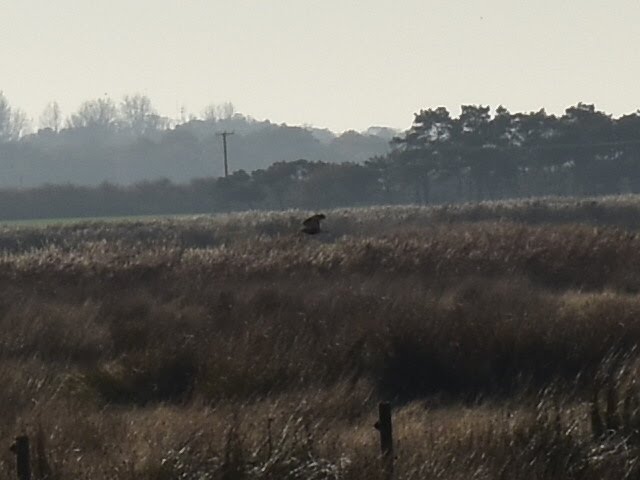 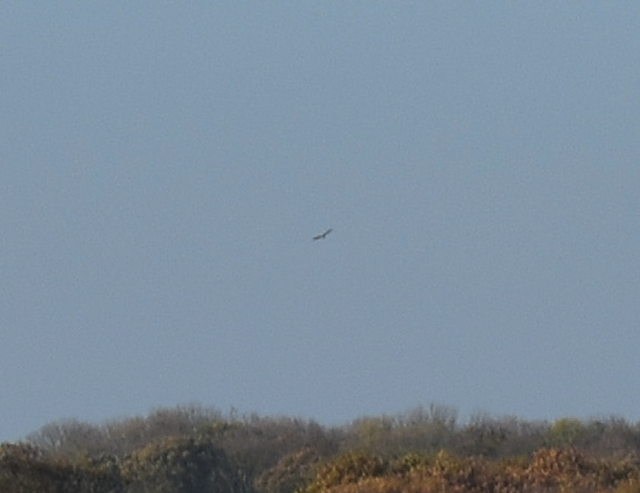 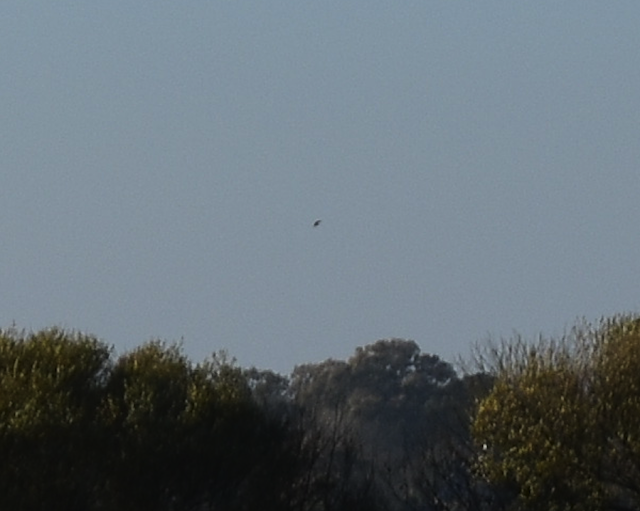 
After lunch at a local pub, where Tom taught me some camera skills, we headed to RSPCA East Winch, the largest animal rescue centre of its kind in Britain, where I met Kevin and Nicola, who care for the many injured animals at the centre. Due to its close proximity to the North Norfolk Coast, the centre mainly receives both species of seals in the country, and most of them are Common. we put on protective suits, and entered an area where young seal pups stay, awaiting treatment. The young Common Seal we were shown had lungworm, a parasite which affects the seal's lungs, and therefore had severe breathing problems. However, since its condition can be treated, the seal had a good chance of survival, which was a relief.

Outside, there was an enclosure with about fifteen young Common Seals, who had all been treated and were due to be released back into the wild in the following weeks, which I was lucky enough to feed! I was given two buckets, filled with fish (I've no idea which species), and soon found that the seals were very excitable! They look very different to Grey Seals, as Common Seals have a more dog-like face. 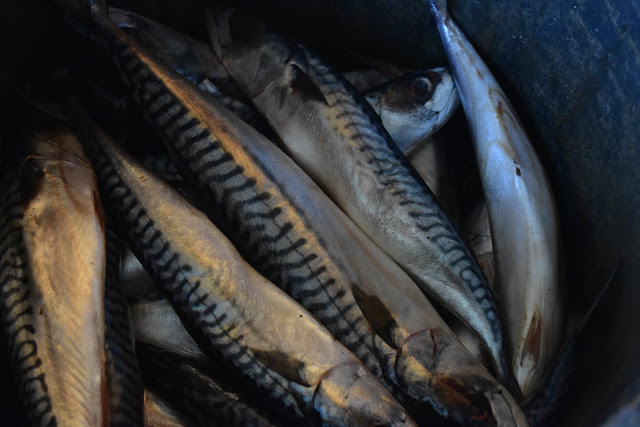 The fish, about to be fed to Common Seals 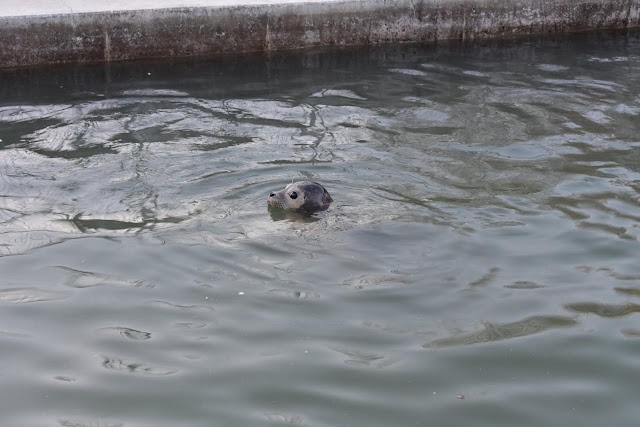 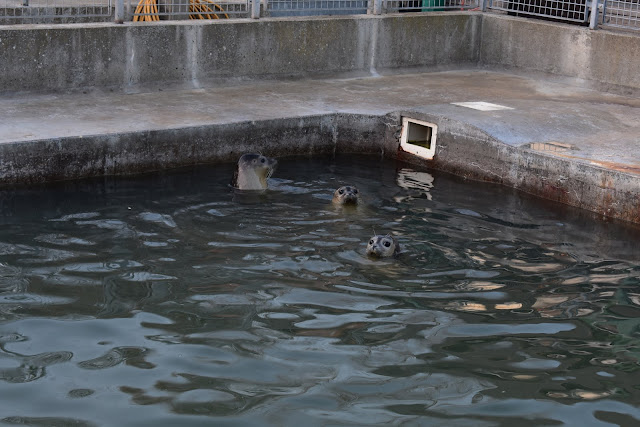 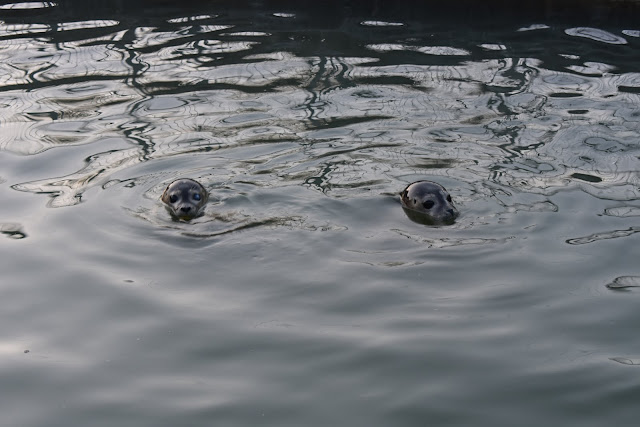 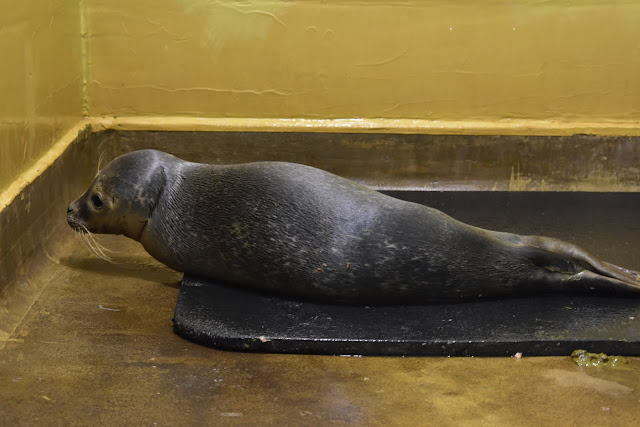 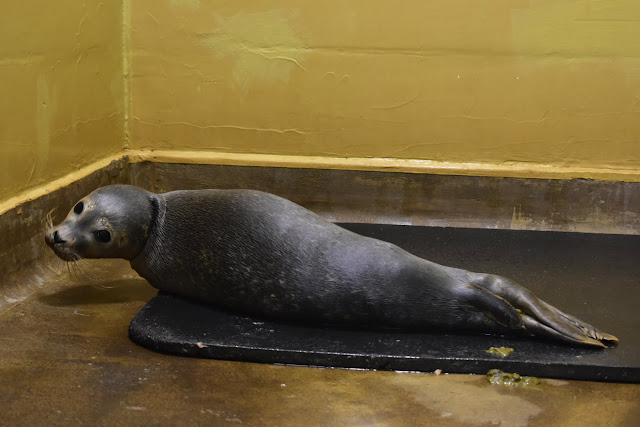 
Nicola and Kevin then kindly gave me a tour around the centre, showing me rooms filled with cages. Then, Kevin took something out of one of the cages, and let me hold it- it was the first time I'd seen a hedgehog! I was also shown the outdoor pens, where wildfowl, foxes, badgers and other mammals stay, and there was even a large barn for raptors. 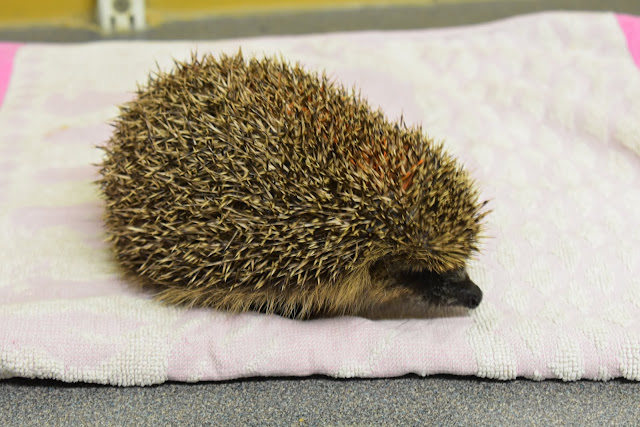 We returned home, where the crew were to film my suburban garden. While all the equipment was being set up, I showed Mike my field guides and the progress of Nature Reserves of London- 2nd Edition at the time. My family, Mike and myself sat down in the garden and ate lemon drizzle cake (this was the set!), and I spoke on camera about the ways I attract wildlife into the garden. I kept mistaking hogitat for frogitat, so there were many takes for that scene! After a few hours of filming and a celebration, we said our goodbyes, and the footage was complete. It was fabulous to spend two days with the crew, who all taught me something new along the way: a once in a lifetime experience which shall always be remembered.

I'd like to thank Mike, Max, Robyn, Annabel, Peter, Nicola and Kevin for their patience and guidance over the weekend of filming, something I'm very grateful for, and also to my mum, dad and brother for all their generosity, motivation and support.

I still cannot process the fact that I can now see my terribly-filmed audition video of myself presenting in the garden with 'BBC' inscribed in the top left corner of it. It's very overwhelming.

2nd March 2019
The previous day, I'd heard of a flock of Waxwings roosting in South Park Gardens, Wimbledon. I thought that there was probably no chance of me having the time total a train to southwest London, but since I had nothing to do, that's exactly what I did. One and a half hours on that train, I reached the Gardens, which looked extremely busy: not a place at all for Waxwings. I met up with Arjun Dutta and Alex Liddle, and we waited for about fifteen minutes. At 4:20pm, we heard a distinct call, and a flood of twitchers raced to one particular tree. At the very top were six Waxwings! None of us could get a clear shot (with cameras...) of them because of the light levels, but with their pink plumage and punk hairstyles, it looked like they were visiting the capital after thirty years (minus their electric guitars and drum kit), so it was a real surprise to those who use the Gardens daily.

For about twenty-five minutes, they moved about the tree, and by this time, more and more people were joining the crowd, including one of Arjun's friends at school. Suddenly, at 4:45pm, a Sparrowhawk scared them away! It was great seeing these beautiful Scandinavian surprises, especially in the capital. This flock was thought to be from the Balham Waxwings last month. Who know where they'll go next? Wimbledon Common? Wimbledon Park? Richmond Park? Somewhere in Wandsworth, Richmond, Merton, Sutton, Lambeth or Kingston? Back to Scandinavia? We can only guess. 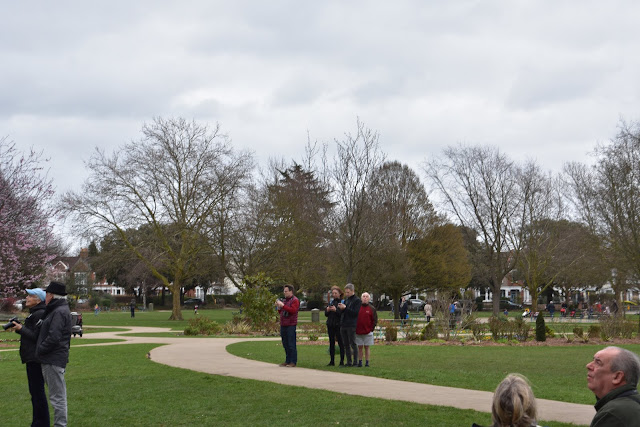 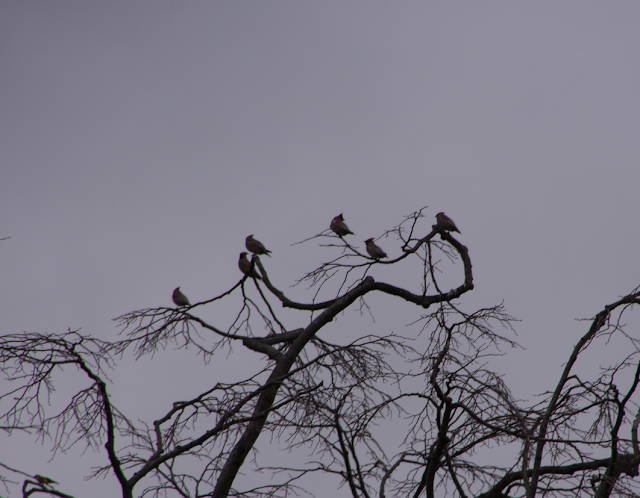 The flock of six 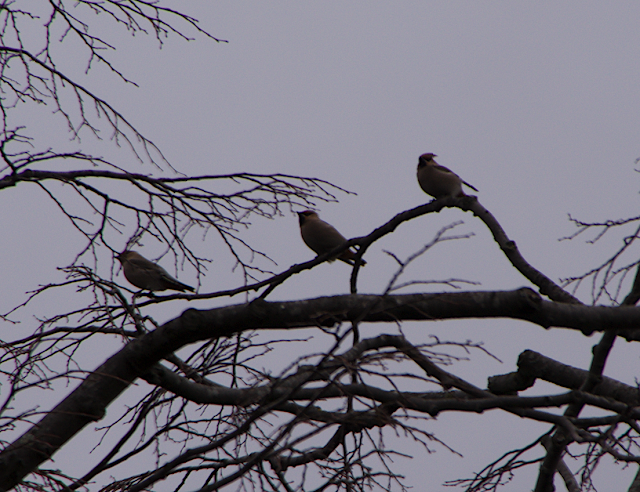 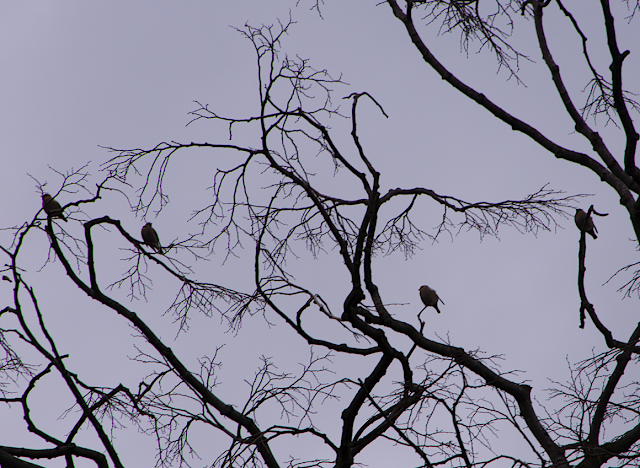 Four of the six Waxwings 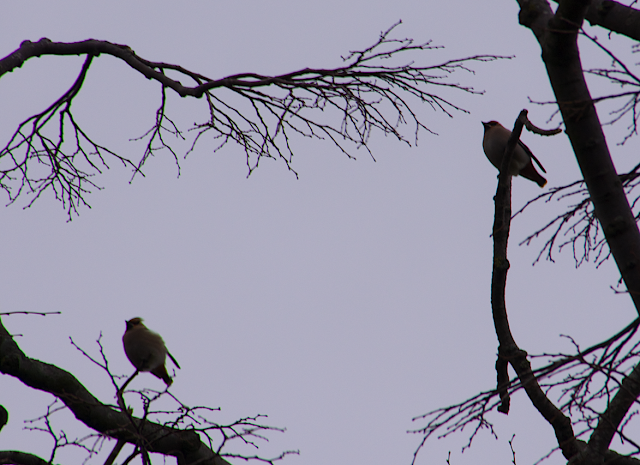 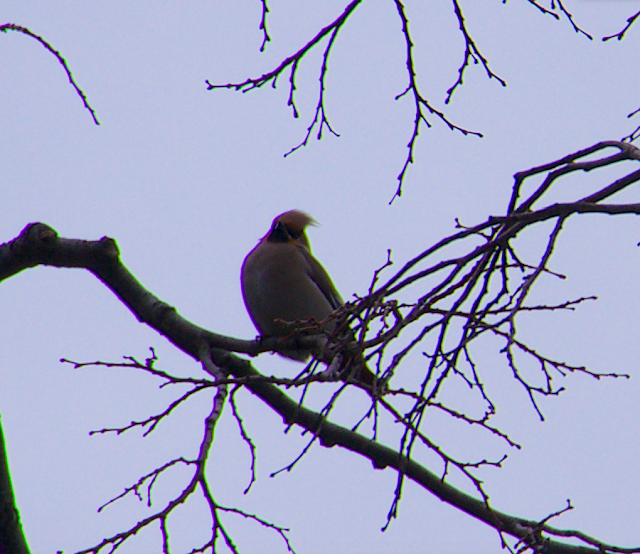 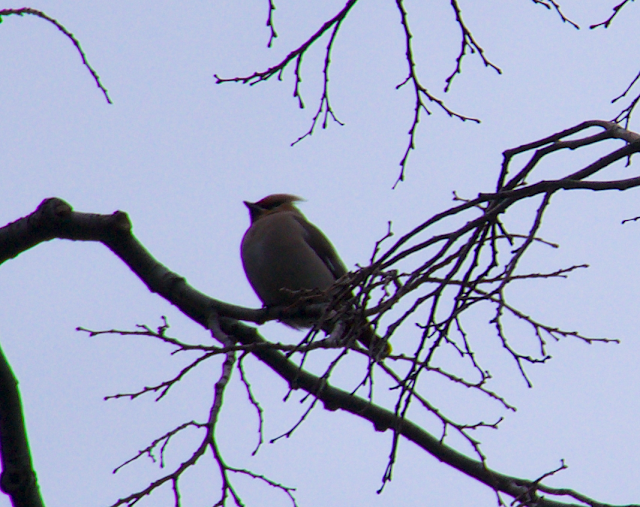 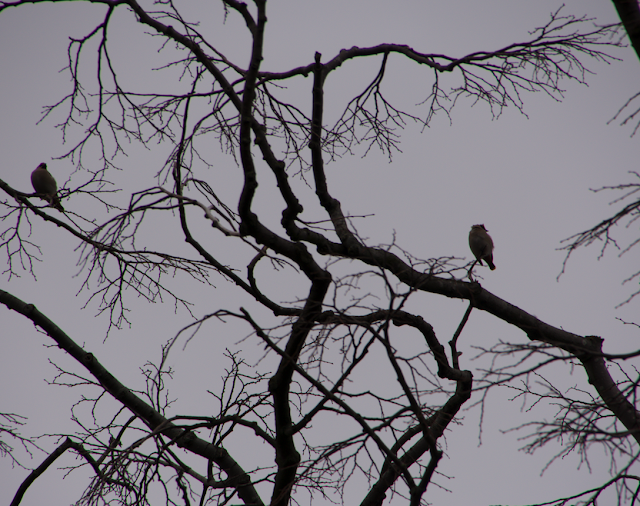