27th May 2020
Today's area profile will be about a small locality in the London Borough of Islington, and one of my favourite. Barnsbury is an affluent area near King's Cross, and straddles the ecological wonder of the Regent's Canal. I first visited Barnsbury in July 2019, after a great trip to a few gardens on Open Garden Squares Weekend: after seeing the innovative Skip Garden (read about it here), I was eager to explore what lay further down the Canal.

The area has a few designated wildlife sites: Bingfield Park, Barnsbury Wood LNR, Thornhill Square and Barnsbury Square. Out of these four, I have only visited Thornhill Square. This lies in the middle of a small residential area, and is adjacent to St Andrew's Church, consecrated in 1854. It consists of a small playground, surrounded by Horse Chestnuts and London Planes, and has a variety of manicured flower displays: nonetheless, they attract many bees and butterflies (I have seen Red Admiral and Small Tortoiseshell here). There are many shrubs around its perimeter, encouraging Blackbirds, Blue Tits, Dunnocks, Goldfinches and other common bird species. This is the same at Bingfield Park, despite lacking tree cover, and Barnsbury Square. The latter has almost a woodland-like character, and interestingly, lies on the site of an ancient camp used by a Roman general, who defeated Boudicca in 61 AD: when the park was being designed, Roman arrowheads were found here.

Barnsbury Wood lies near to Thornhill Square, and is usually open on Tuesdays. It is a small Local Nature Reserve, and the second smallest in London, after Burnt Ash Pond in Lewisham. The reserve is used for education purposes, encouraging the local primary schools to use the space on weekdays, which is marvellous! I have only stood outside the entrance as it was closed the day I visited Barnsbury, but according to Islington Council's website, the LNR is home to Long-tailed Tit, Toad, Sixteen-spot Ladybird and the rare Lesser Stag Beetle. There are a few other green spaces in Barnsbury, such as Barnard Park and Caledonian Park. 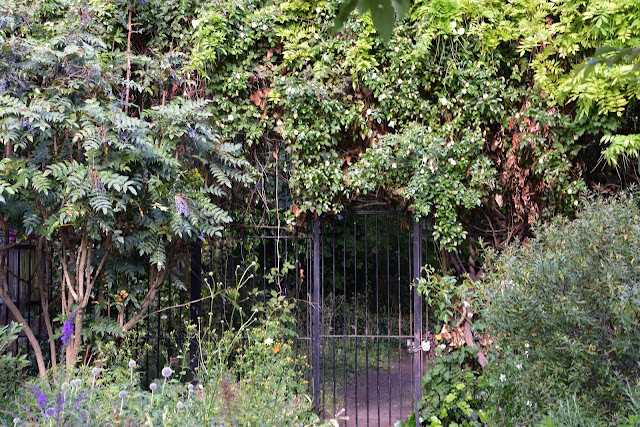 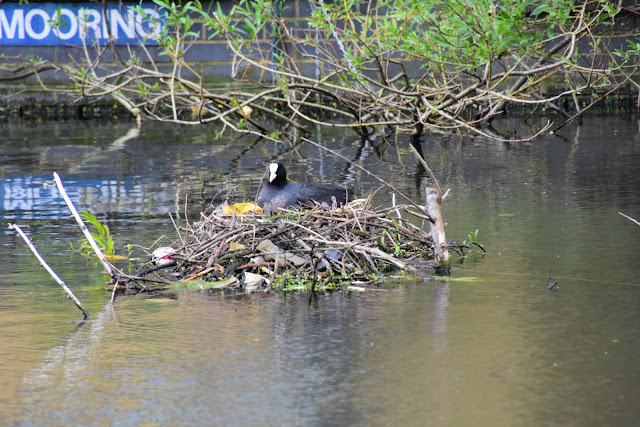 A Coot on its nest 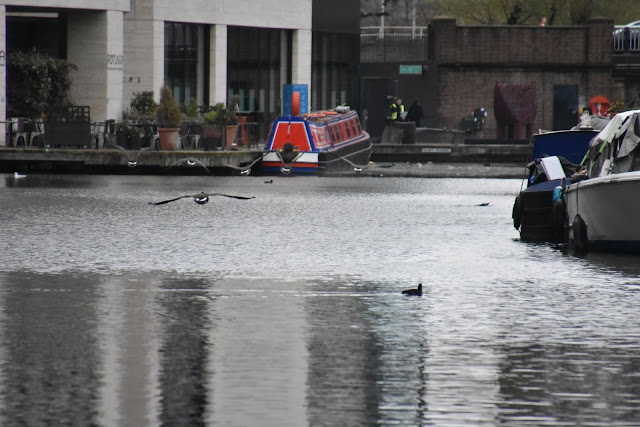 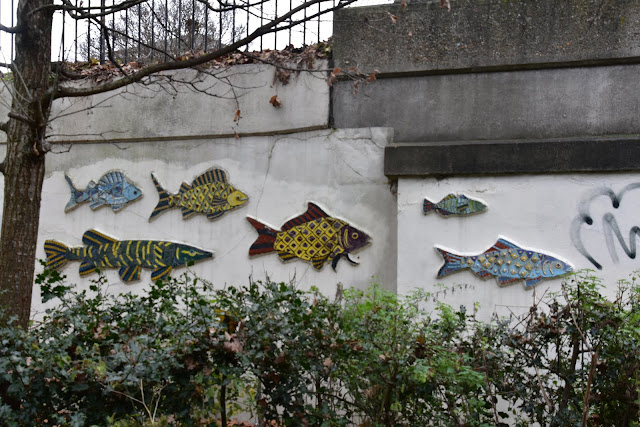 A beautiful mural of the fish of the Regent's Canal; 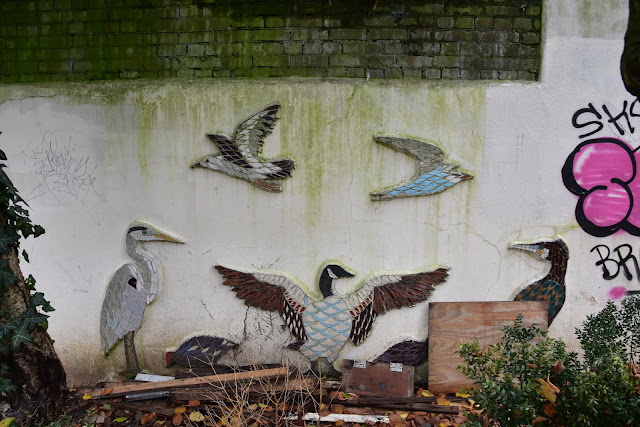 the birds of the Canal; 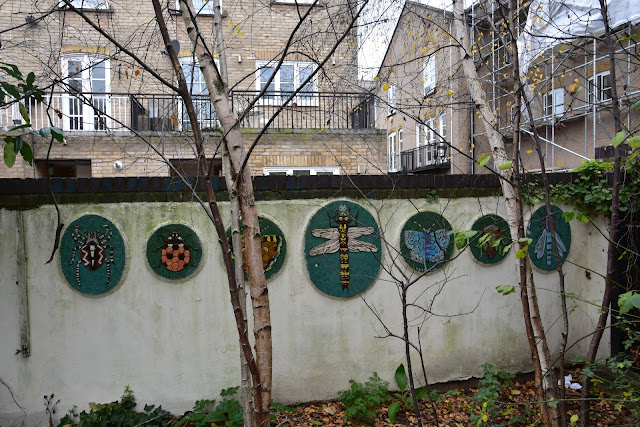 and its invertebrates, at Thornhill Bridge Community Garden, created by a local initiative, Cally Arts 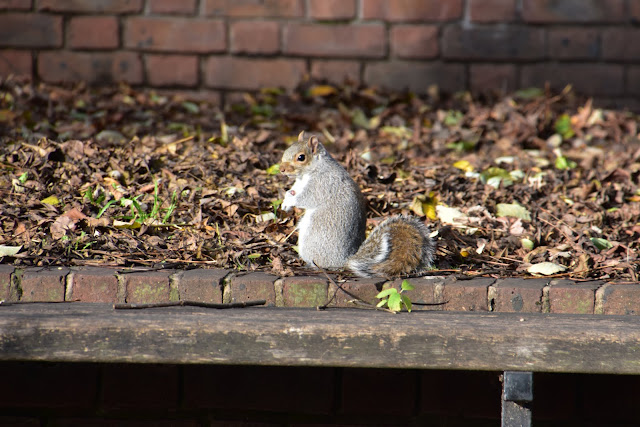 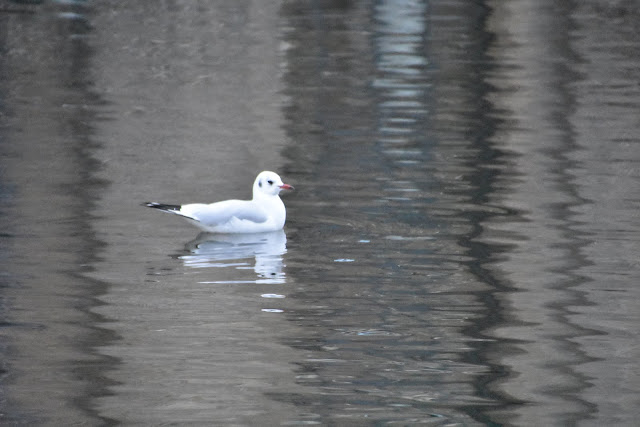 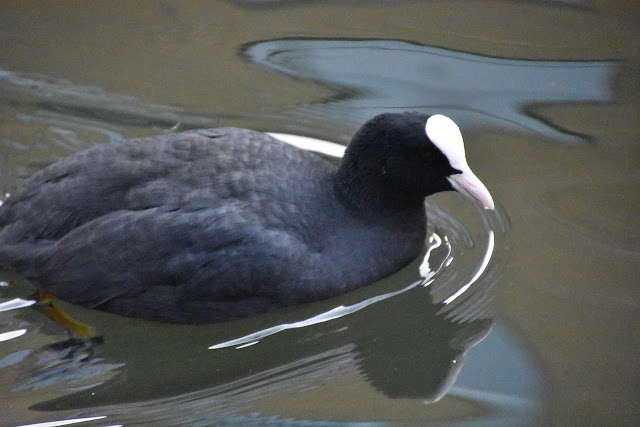 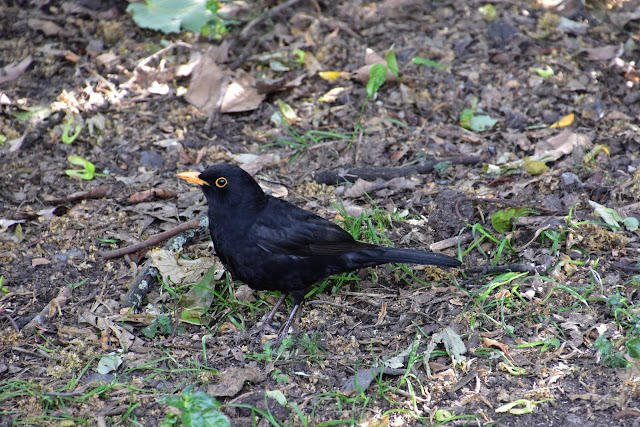 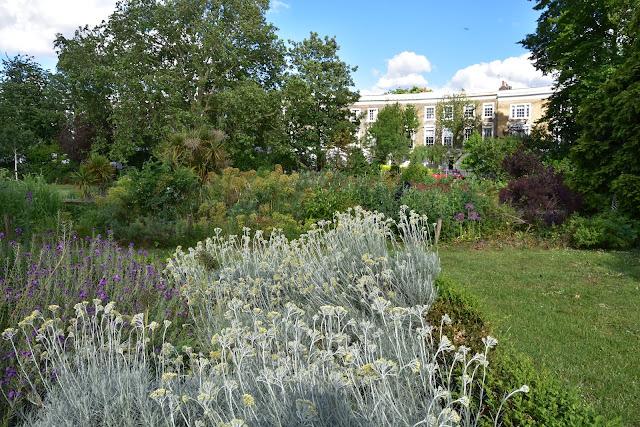 The area has a diverse history, starting in the 13th Century, when a swathe of modern-day Islington was owned by the powerful Berners family. The family were granted the land after the Norman Conquest, and gave their name to what is now Barnsbury (the original name Bernersbury was recorded in 1274). By the early 19th Century, development had only just begun, due to legal obstacles. The area became the first stop for travellers to rest on the journey from London to the North of England, and there was often a considerably large amount of agricultural goods and livestock passing through, due to its close proximity to Smithfield Market. Barnsbury was strong in its local trade, and became popular with the upper class, who desperately wanted to escape the industrial and polluted City of London, Spitalfields and Clerkenwell. Around this time, the King's Cross to Limehouse stretch of the Regent's Canal was being built, leading to the creation of Horsfall Basin, named after its first landowner, and its wharf buildings were completed in 1822 (today this is Battlebridge Basin). In the late 19th and early 20th Centuries these buildings were used to store ice from Norway.

In the 1830s and 40s this semi-rural suburb evolved into Frenchman Henri Baume's short-lived Barnsbury Park Community, a project which urbanised the area and aimed to bring its people together. The project set up a farm and a college, maintained by enthusiastic shoemakers and tailors. The Holy Trinity Church was built around the same time, by the architect who designed the Houses of Parliament, Sir Charles Barry. In the 1840s, Barnsbury Wood was the garden of George Thornhill, MP for Huntingdon, who built the surrounding houses.

When the Industrial Revolution began in the early Victorian era,  Barnsbury's affluent residents quickly moved out, as it was encroached by terraced houses for factory workers, and some larger houses became factories themselves. These terraced houses make up most of Barnsbury today. In 1826, Caledonian Road (or 'The Cally' as residents call it) was built, named after the Royal Caledonian Asylum, which is still a charity today. The Road was situated in Copenhagen Fields, which is now the Caledonian Clock Tower and its surrounding parks. In 1842, HMP Pentonville was built on the Barnsbury part of the road. 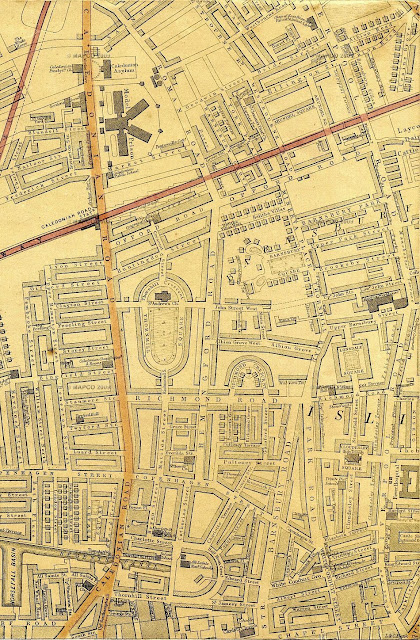 Barnsbury is sometimes seen as one of the pioneers of post-war gentrification. In the 1960s, the area became more appealing to the middle class, when run-down houses were demolished and replaced by the Barnsbury Housing Association, formed in 1967. They also restored the interiors some of the late Georgian and early Victorian terraced houses, some of which had retained their characteristic facades, a reason why passers-by assumed that a redevelopment was not needed. As a result, house prices shot up.

Today, the majority of the terraced houses are intact and retain their splendour. There is also a large council estate, the Barnsbury Estate, and the area is served by the Piccadilly Line's Caledonian Road Underground Station, and Caledonian Road & Barnsbury Overground Station. The latter replaced an older station nearby and was opened in 1870, while the former (actually in Lower Holloway) was opened in 1906 by the Great Northern, Piccadilly and Brompton Railway, built with oxblood tiles by Leslie Green. Battlebridge Basin, named after an ancient crossing over the subterranean River Fleet, is now home to the London Canal Museum, which was constructed from one of the old ice storage buildings from the 19th Century: two of its ice wells can be seen today. The Museum covers all aspects of the UK's canals, and runs guided tours through the Islington Tunnel and surrounding area.

Barnsbury's boundaries used to be the Thornhill ward, named after the MP who built its houses, but today this consists of Islington's Caledonian and Barnsbury wards. 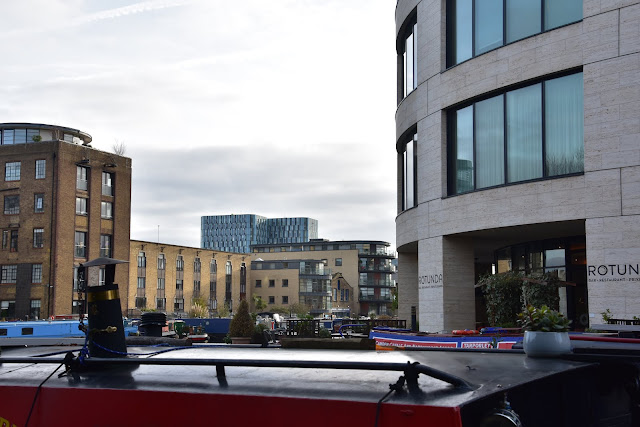 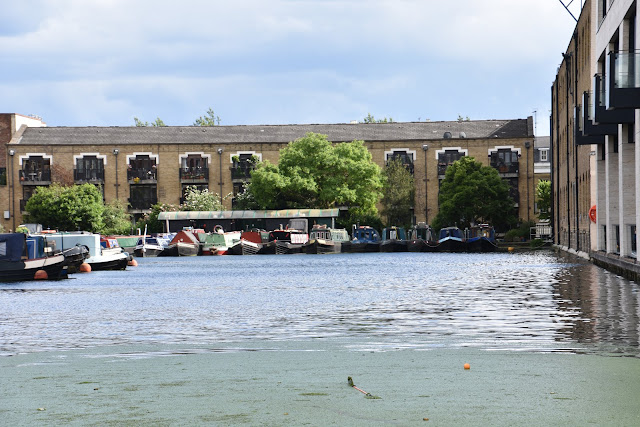 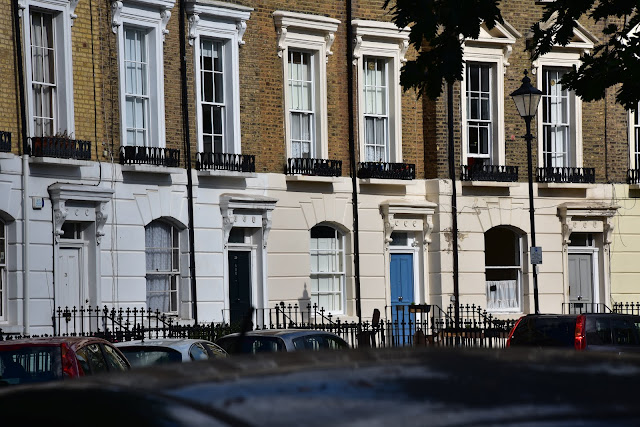 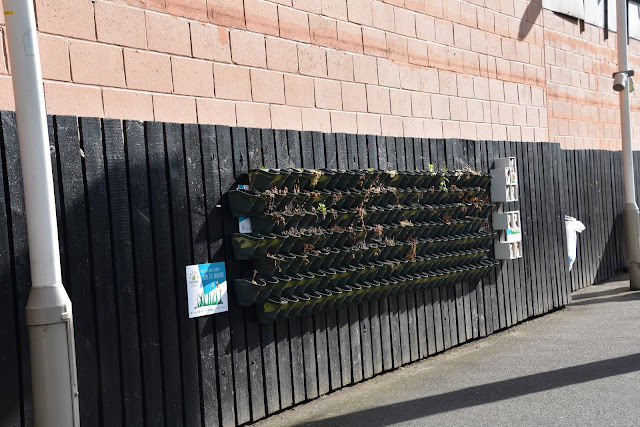 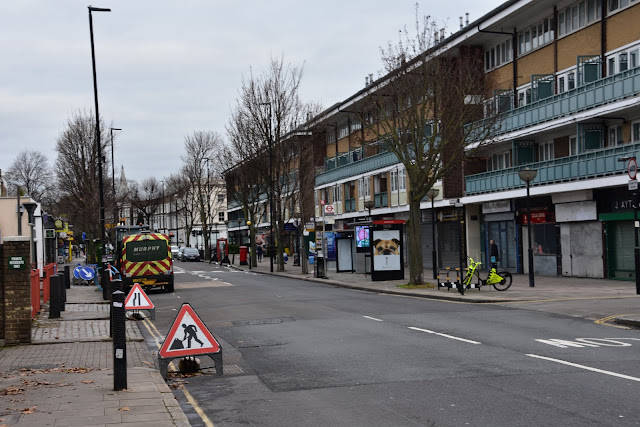 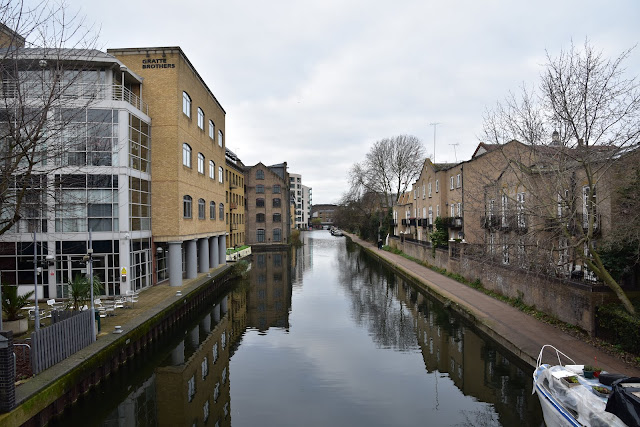 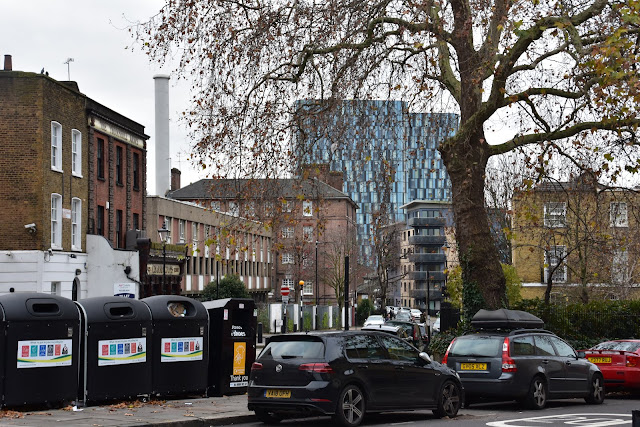 A residential street, with what appears to be a former industrial building in the background

Whenever I have visited this hidden gem of Islington, seeing the historic facades of the houses and the old Victorian parks never fails to surprise me. Of course, its beautiful green spaces will certainly show a visitor that the capital's habitats are diverse, even when close to central London.