A visit to Crossness, Bexley

Setting off from London Bridge, the Thameslink train rushed through the leafy suburbs of South East London. The high rises of Lewisham town centre quickly transformed into the quaint Victorian streets of Plumstead, which in turn became the 1930s-built houses of Falconwood and Welling. This was the first time I was visiting the borough of Bexley, drawn by one of its ecological secrets: Crossness Local Nature Reserve. Disembarking at Bexleyheath station, I met Ralph Todd, a local naturalist and conservationist, whom for the past few decades had led the RSPB Bexley Group with his wife Brenda. His wealth of knowledge - both about Bexley's environment and the natural world as a whole - was astounding. There was no better person to be exploring the mosaic of Crossness with.

Driving from the station towards the Thames gave us the opportunity to view the borough's changing landscape. Beyond the houses of Bexley was the boundary with Greenwich, where the urban residential area had petered out, becoming the sprawling canopy of Bostall Woods. The Woods are an SSSI and a former haunt of highwaymen. Beyond the woods, the road eventually took us up over a flyover, giving us a sweeping view of all of Bexley. To the east was the 1960s-built Thamesmead Estate, where Ralph often conducted wildlife surveys, at an area of green space called the Thamesmead Ecological Study Area.

In front of the Estate lay the gargantuan Southmere Lake, and to the west, acres of sprawling parkland. As the flyover descended adjacent to Southmere Park, we entered the borough's forested motorways - endless, pleasant corridors of trees that seemed to stretch for miles in every direction. One of these corridors led us to a final defining feature of Bexley's beautifully discordant landscape: Crossness.

To our right, distribution centres bustled with the traffic of vans and lorries. And on the left, the fenced-off sewage treatment works, which concealed the subterranean Crossness Pumping Station (built to combat the Great Stink of 1858). Rows of reeds lined the roads, bursting out from behind the boundary fences. Towering above the reeds, sitting in between this industrial world and the marshland beyond it, stood two gigantic incinerators, appearing to guard their surroundings like sentinels. This was a wild combination of grey and green which I had never seen before in the capital. It was absolutely stunning.

Ralph unlocked the gate to the reserve beyond. Hedgerows lined the road to the nature reserve's footpath, while acres of surrounding grass and reedbeds swayed daintily in the light breeze. We disembarked from the car, and marvelled at this patchwork of habitats. A lone Sedge Warbler belted its fluid and babbly tune atop some teazels: Ralph remarked it had been singing frequently at this spot for the past few days. 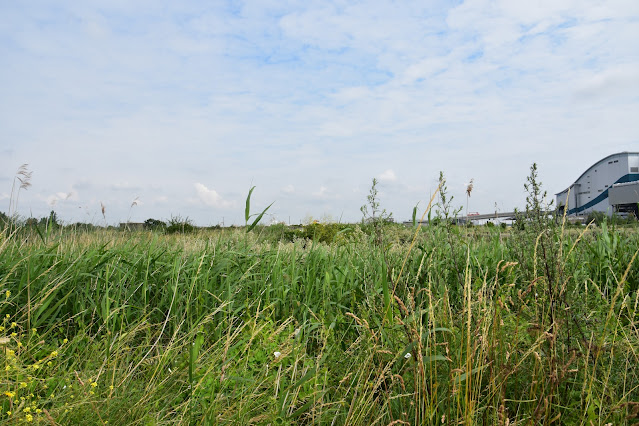 These habitats have ancient origins, being in their present state as grazing marshes for at least 800 years. However, it is only because of the work of the Friends of Crossness volunteer group that it continues to be a thriving haven for wildlife. One of the group's leaders is Thames Water site manager Karen Sutton, whom we met as we arrived.

Karen introduced me to the work of the volunteers, who help to raise awareness of the site's biodiversity, record its wildlife, and look after its diverse range of habitats. The group's membership had seen a significant increase during the pandemic, and it was encouraging to learn that more people had developed a passion for their local green space.

After meeting Karen, Ralph and I walked to the beginning of the reserve footpath, bordered by inquisitive horses which had paused briefly from grazing in their pastures as they noticed us. We walked past channels where scores of common blue damselflies danced on the water's surface, while House Sparrows chirped and flitted above the abundant bindweed. Although some may find its flowers attractive, and they benefit bees and moths, Ralph warned that bindweed would be extremely difficult to remove from gardens if introduced.

Opposite the stream and the bindweed was a tall fence, separating Crossness Water Treatment Works from the reserve. Sections of the fence had been hidden by the growth of hedgerows planted by the volunteers: an astonishing sight of green coexisting with grey. 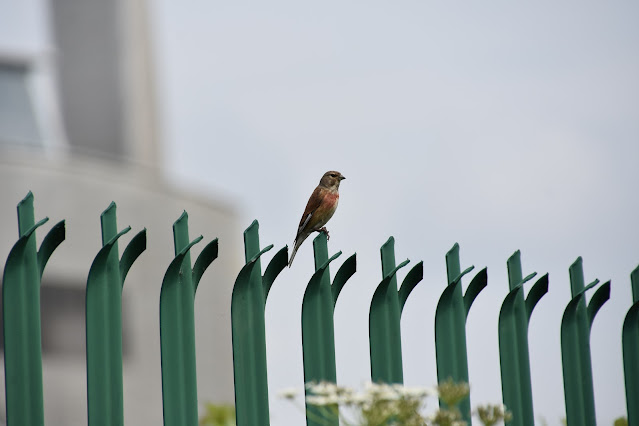 Development on the ancient grazing marsh was not a novel occurrence. The first major change to the habitat took place in the late 19th Century, with the expansion of the Royal Arsenal munitions factory on Plumstead Marshes. Surprisingly, the marshes' birds were recorded quite often, by the munitions inspector Richard Ruegg. These included Red Kite, Bewick's Swan in winter, and even Little Bittern. Unfortunately Plumstead Marshes no longer exist today, gradually eaten away by developments such as Thamesmead. Today the surviving Erith Marshes and Crossness, though threatened, still have a plethora of bird species.

The path soon rose from the hedges, fences and channels, into an expanse of gorgeous scrubland. Linnets chatted noisily in all directions, darting furiously in the muggy air, with the sound of jangling keys emanating from the scattered bushes. Ralph suspected the population had had their second broods, which had recently fledged.

By this time of the morning, the sun had peeked from behind the newer of the two incinerators, illuminating the scrubland in a haze of bright gold. The scrubland itself was still fairly quiet, apart from the Linnets and the odd 'peewit' of a Lapwing, so we ambled up along a ramp to see what birds Old Father Thames could offer.

Lush reedbeds clung on to the mudflats as the river lapped against the banks, from which intermittent explosions of Reed and Cetti's Warbler song emerged. Clustered around the reeds' delicate stems, Oystercatchers preened their feathers, and a Common Sandpiper trotted in circles, in clumsy desperation, searching for something to eat in the mud. Great Crested Grebes, an uncommon sight in a river, seemed to prefer the edges of the reeds. Their spherical bodies bobbed up and down in the waves until they disappeared beneath the surface.

A rushing sound filled our ears. The sewage outflow from the treatment works spilled out noisily into the river, met by the raucous chattering of seventy-five Black-headed Gulls. From this I remembered learning from social media about the rare gulls that the reserve has hosted in the past, and asked Ralph if we might be lucky enough to see a Bonaparte's Gull that day. Instead, he challenged me to identify one among the indecipherable flock of gulls in the water, at which I failed miserably.

The sewage outflow was enveloped in a large shadow, cast by the older of the two incinerators. The looming sentinel's facade seemed to have grown weary, with dust gathering on its intricate and undulating spine. It hummed with determination, in competition with a Water Rail which croaked in the undergrowth beneath it.

Industry was present on both sides of the Thames. The famous Ford plant dominated the view of Barking & Dagenham, its blue logo like an eye staring back quite ominously at the incinerators. The factory was the centre of a rugged landscape, a remarkable clutter of wind turbines, cars, trailers and chimneys. the only natural feature was the Beam River, a sliver of green squeezed between the landscape's corrugated crevasses. 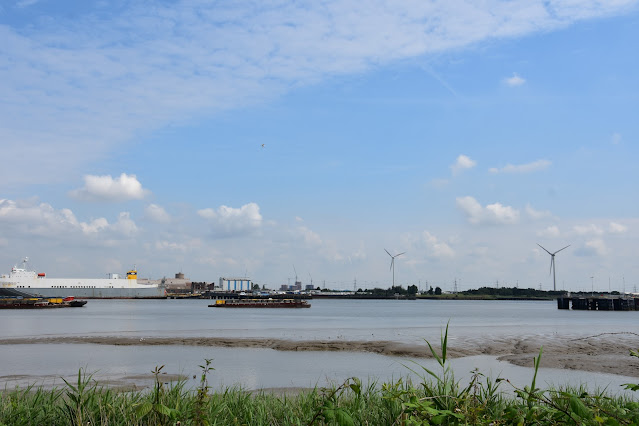 The Thames between Barking & Dagenham and Bexley

Retracing our steps from the Thames, we soon came face to face with the newer incinerator. Atop its spine, comparatively shinier than that of its neighbour, sat two Peregrine falcons. The species had become increasingly common in the capital, favouring taller buildings to nest in, which imitated the cliffs where they were once more commonly found. One falcon was slightly larger than the other, a female, gazing authoritatively over Erith Marshes; while the male looked perplexed, frantically turning his head in every direction. Peregrines were yet to breed in the area, though there had been a breeding pair in nearby Abbey Wood.

Before lunch, we stopped at a recently-built viewing screen overlooking the grassland and marshland in front of the newer incinerator, which we had seen upon our arrival. Ralph informed me the area of marshland was known as the West Paddock. Two years before, Lapwings had successfully bred on these fields for the first time: a glimmer of hope here for this red-listed species, sheltering from the ever-encroaching shadow of human interference.

We retreated from the afternoon heat to the protected area of the reserve, to eat our sandwiches. Secluded by foliage and a charming weather vane, the hexagonal Friends of Crossness bird hide offered 360-degree views of reedbeds. Ralph explained some of this habitat had occurred naturally, but through the efforts of the volunteers, an extra 72,000 reeds had been added, creating a valuable habitat for waterbirds and warblers. Among the topics we discussed were our planned birding trips abroad, many of which had been cancelled due to the pandemic; and how to encourage more young people in Bexley to enjoy the natural world.

After lunch, we headed into the reedbeds, listening out for Willow Warblers, Blackcaps and Chiffchaffs concealed in the overhanging trees. The golden reeds evoked memories of Titchwell Marsh and Lakenheath Fen, and the sanctuary they provided for Bearded Tits, Bitterns and other charismatic species. It would not be impossible to imagine them visiting Crossness, if they had not already in the past.

Venturing out of the reedbeds, we reached a viewpoint overlooking the marshes, and the hubbub of development and distribution centres around it. It offered a moment of reflection for both of us, on the future of Crossness. Its wildlife was still at risk from the onslaught of the built environment.

Ralph explained that two data centres and yet another incinerator will replace replace the marshes and their red-listed species next year. He and other local conservationists had campaigned against this, but it was heartbreaking and frankly unimaginable to think that this habitat, with its ancient origins and incredible array of wildlife, would be lost forever in a matter of months' time. From my own experiences of campaigning, to save Warren Farm in Ealing from future development, it is an important part of uniting communities and raising awareness of the threats faced by nature reserves like this one.

Crossness is indeed an extraordinary hidden ecological jewel in Bexley's crown, with its fragile habitats and species diminishing over the centuries. But what remains is stunning, and its future will be determined by greater awareness and cooperation between everyone to protect it. Only then will future generations be able to hear the 'peewit' of a Lapwing in urban Bexley. 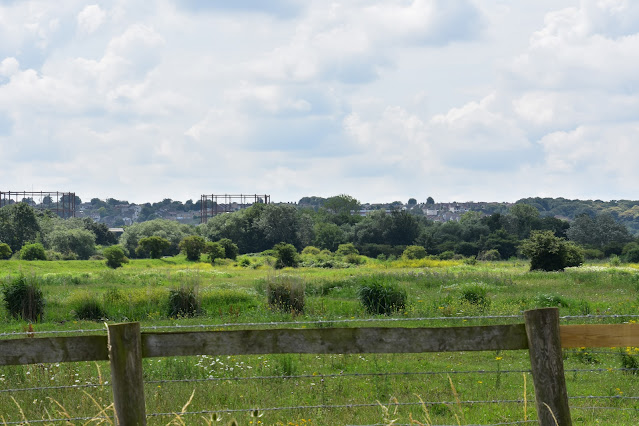 The fields of Crossness, with Lesnes Abbey Wood behind it